Carlsby is a town almost in the centre of England, it lies on what is now known as the West Coast Main Line, which was, before 1923 the main route of the London and North Western Railway, but in the period of the late 1920’s and early 1930’s the system was owned by the London Midland and Scottish Railway, then the largest single employer in Britain.

There were four lesser lines radiating from the town, the first of these departed the main line to the South of the town station to towns in South East Warwickshire, and was also an old LNWR preserve.  Much coal traffic was generated by the Warwickshire Coalfield, whose pits had several outlets on the line, and a healthy passenger service originated in bays at the South end of the station (both junction and bays are out of sight from our viewpoint North of the station but locos from the local shed are extensively in use on both passenger and freight turns on the line).  The route from Leicester to Birmingham was a Midland Railway concern prior to the grouping and while some passenger trains passed through the station, most traversed a flyover, using another smaller station, however large quantities of mineral traffic with destinations on the LNWR routes passed the through the main station to and from the marshalling yards, once again to the south of the station.  The last line headed off to the North East into Leicestershire and eventually Derbyshire and onwards, this line was jointly owned by LNWR and MR.  Local passenger traffic was shared between the two companies and even at this time in the LMS’s ownership both ex-LNWR and ex-MR locos can be seen hauling the trains using it.  Its junction was just to the North of the station and climbs away from the river valley into the rolling hills in that direction, many heavier freights and some passenger services require a banker on the short, steep climb away from Joint Line Junction.

Opposite this junction is the shed where a very healthy stud of freight and local passenger locos are based, a few express locos are turned round at the depot but there are limited facilities for these.  The area through which the joint line passes also has many coalmines sending much of it’s production towards London through Carlsby Yard. Other traffic seen regularly from the area north along the main line includes salt, milk and cattle in considerable tonnages.  Road fuel and oil products were just becoming a feature of the freight scene in the 1920’s and a great number of companies existed, each with its own distinctive tank wagons.  Each evening trains from Burton-on-Trent used this route to the metropolis carrying large quantities of BEER, the empties returning in the morning!

The layout is in the early stages of scenic development and hopefully more locos and rolling stock will be produced and acquired in the future.  Not all stock can even now be displayed at once and over 300 wagons, 50+ coaches and 20+ locos take turns on show! 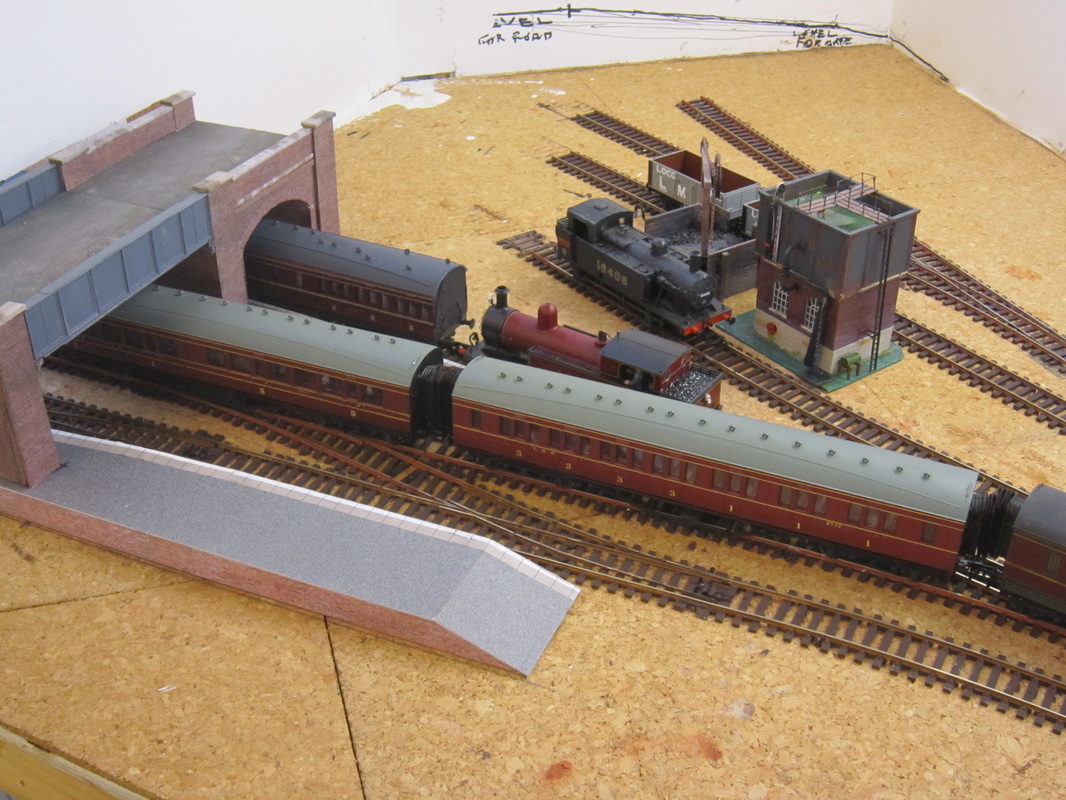 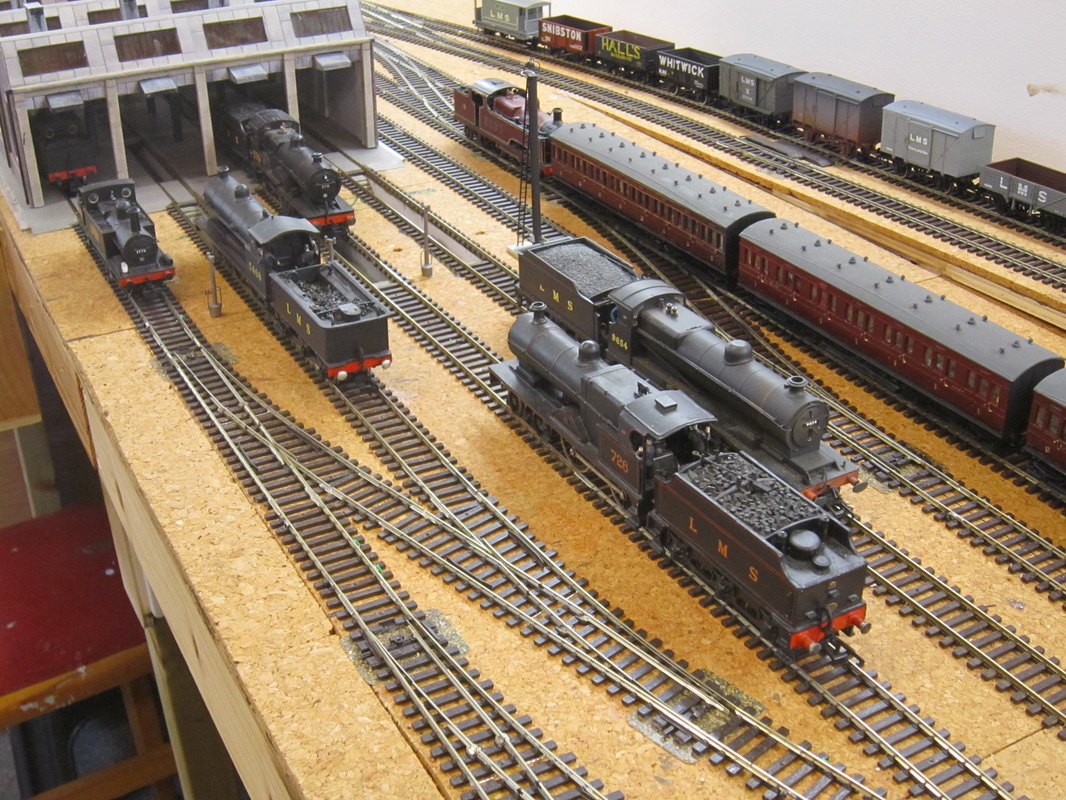 Carlsby MPD with a variety of locos on shed. 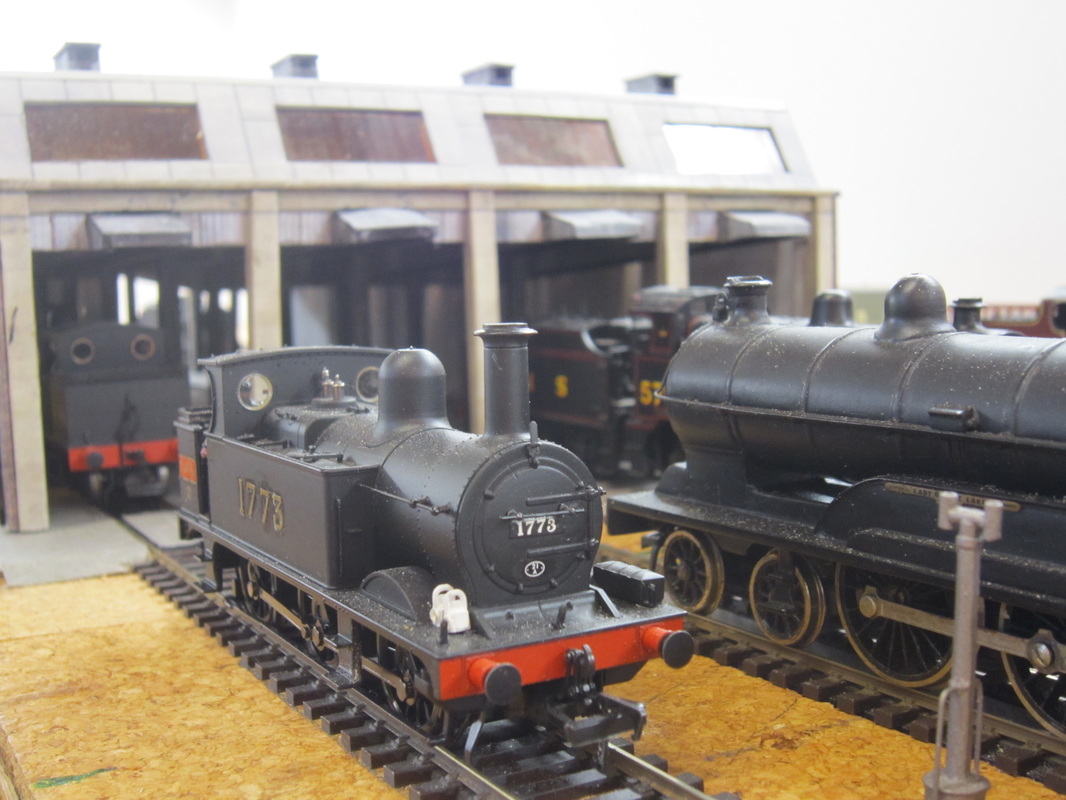 A close up of Carlsby shed. 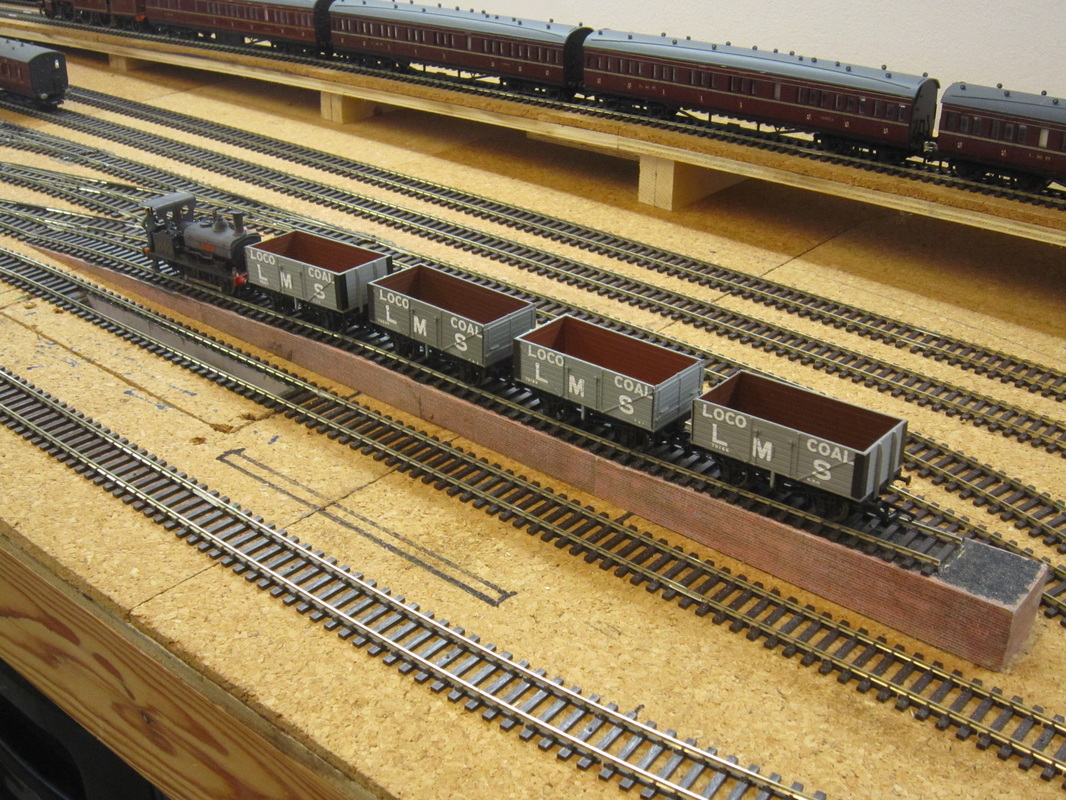 Coal wagons being shunted in the the shed. 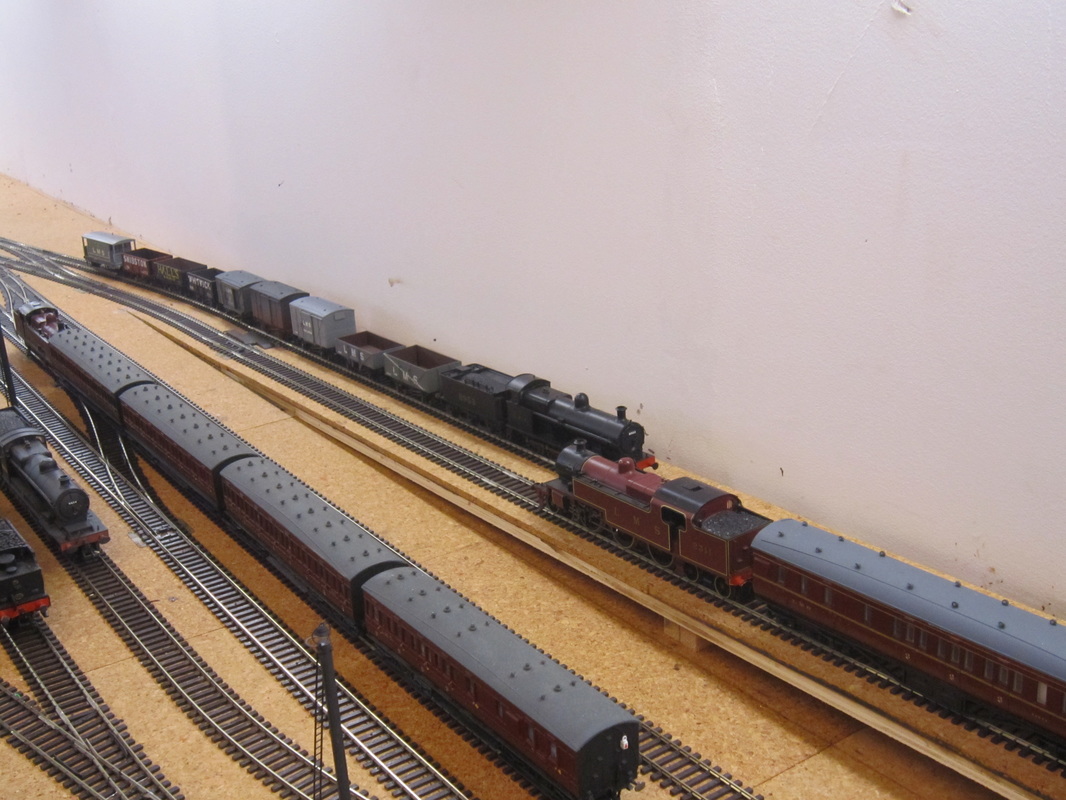 A busy scene at Joint Line Junction with the mainline in the foreground and the branch climbing steeply in the background. 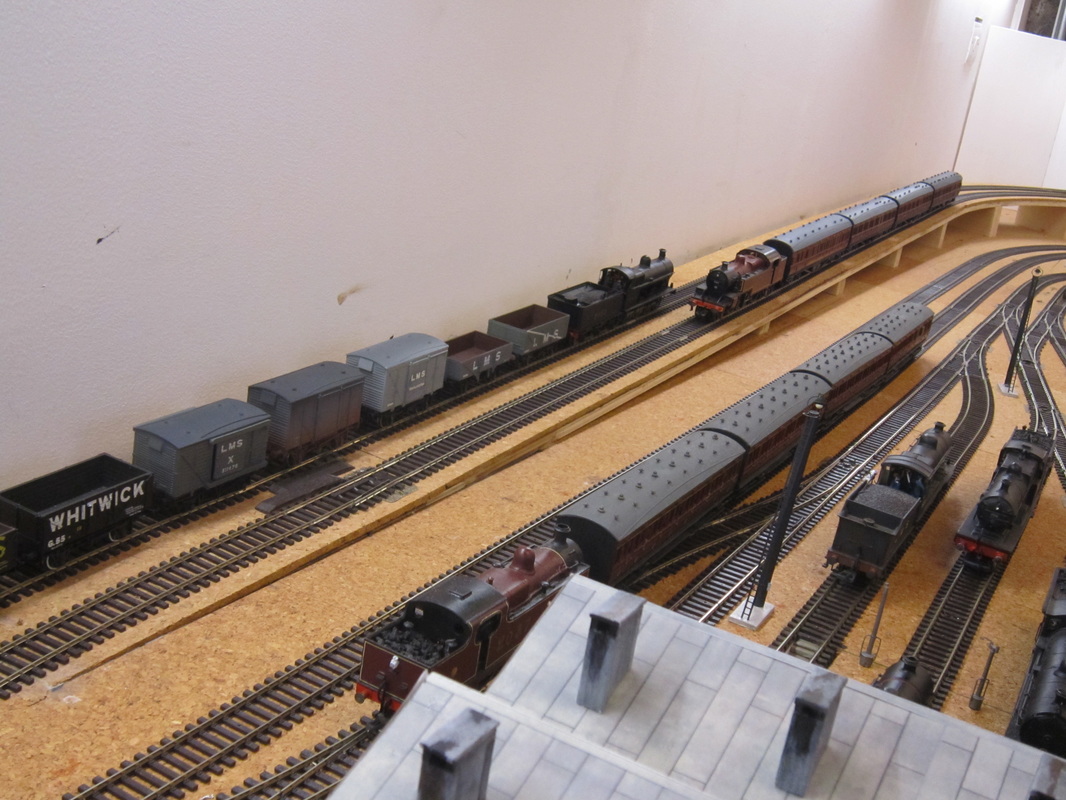 Looking the other way from Joint Line Junction with the MPD in the foreground. 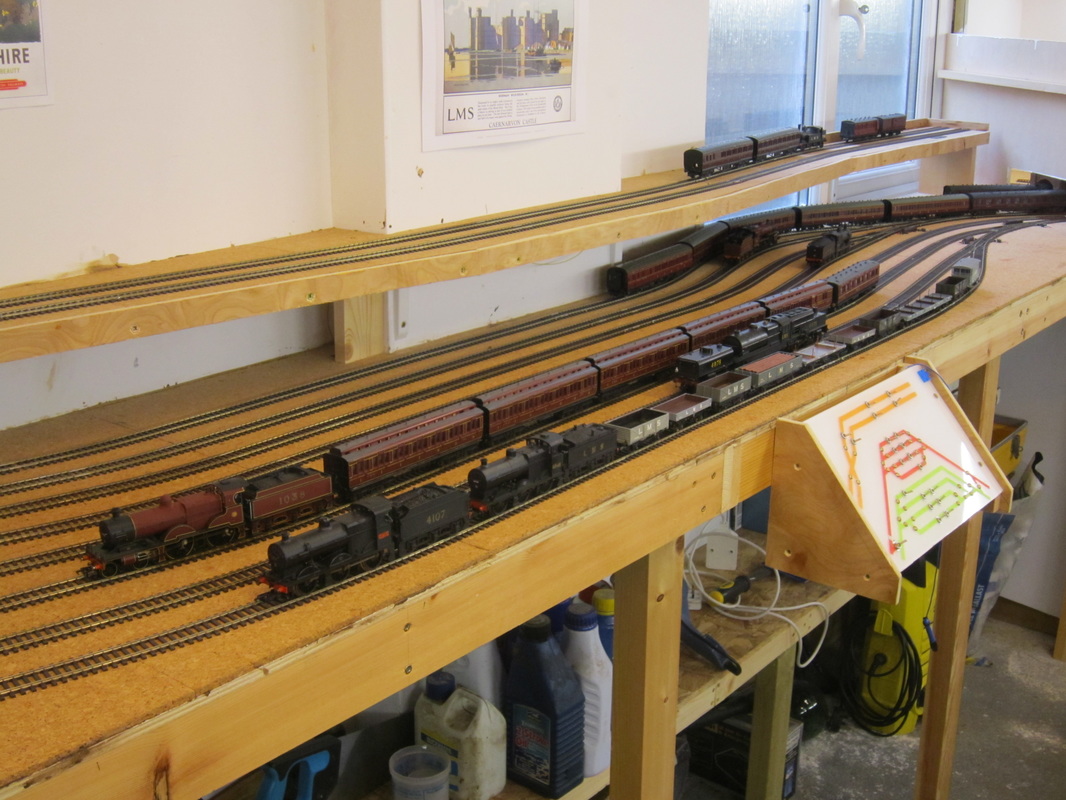 The fiddle yards, which to Carlsby is the rest of the world.
A recent addition to the MPD is the turntable.  Built from a brass kit, this is a 50' table has been motorised and stops automatically at the appropriate entrance/exit track.  Another addition is the coaling stage and water tank.  Nearer the station a goods shed has been added to the goods yard.  Both these buildings are from the Scalescenes range. 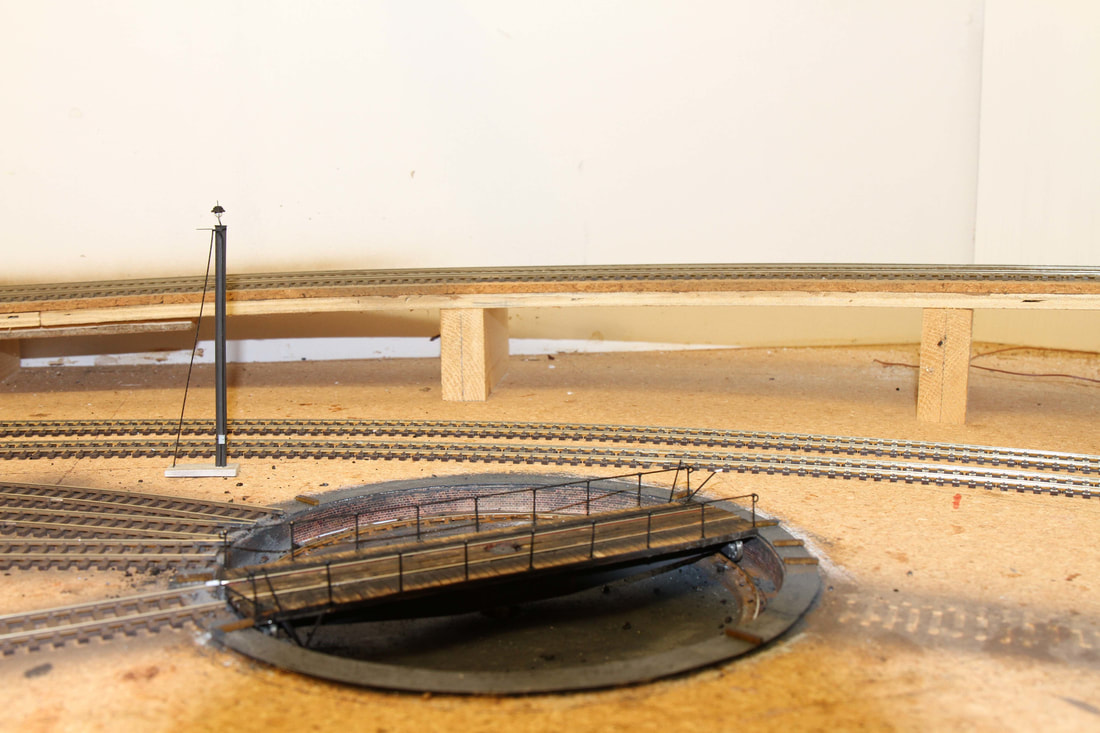 A view of the new turntable. 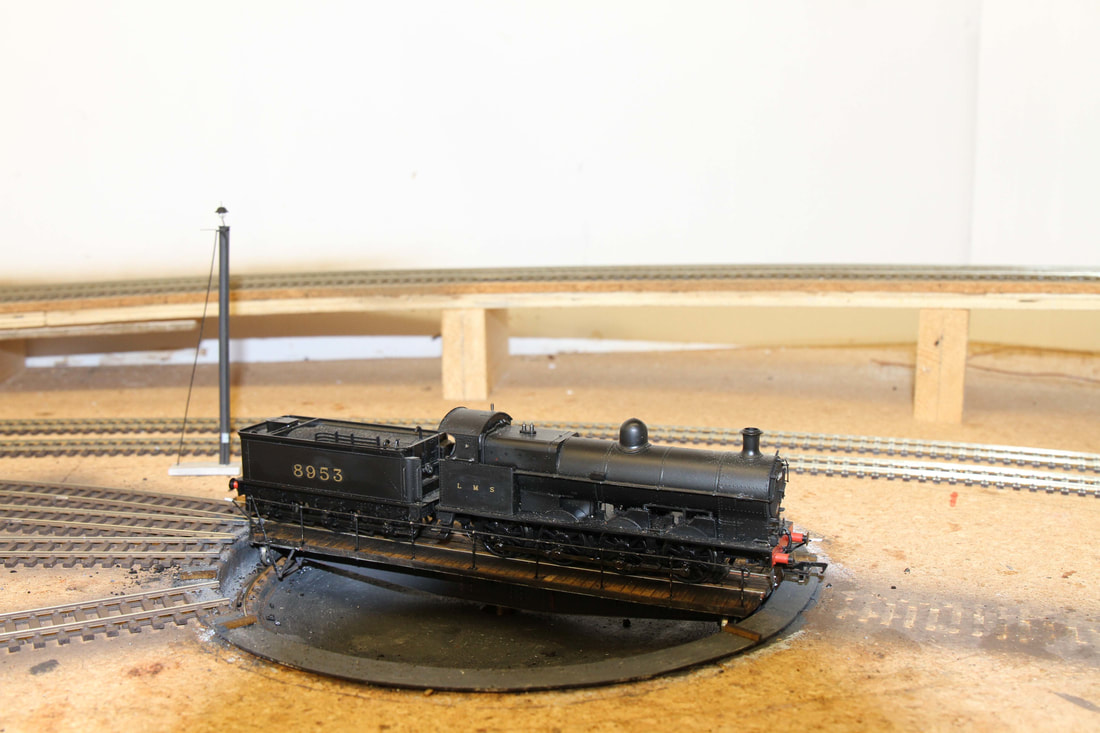 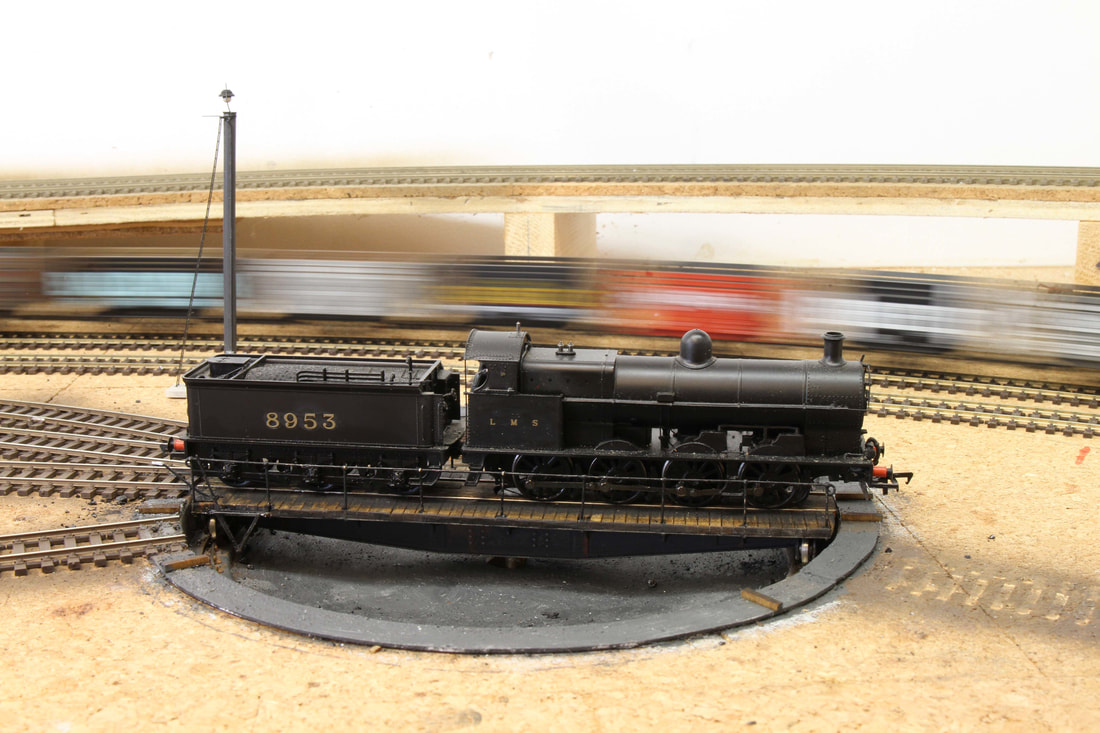 Another view of the LMS G2A on the turntable, while a goods passes on the mainline. 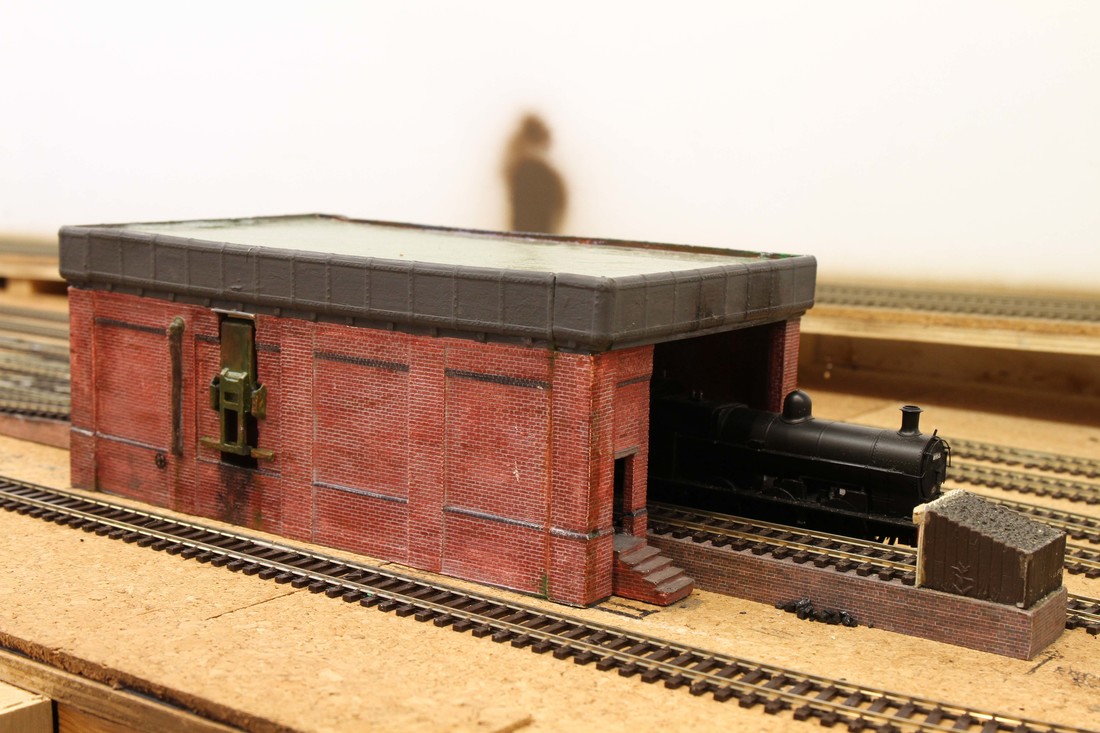 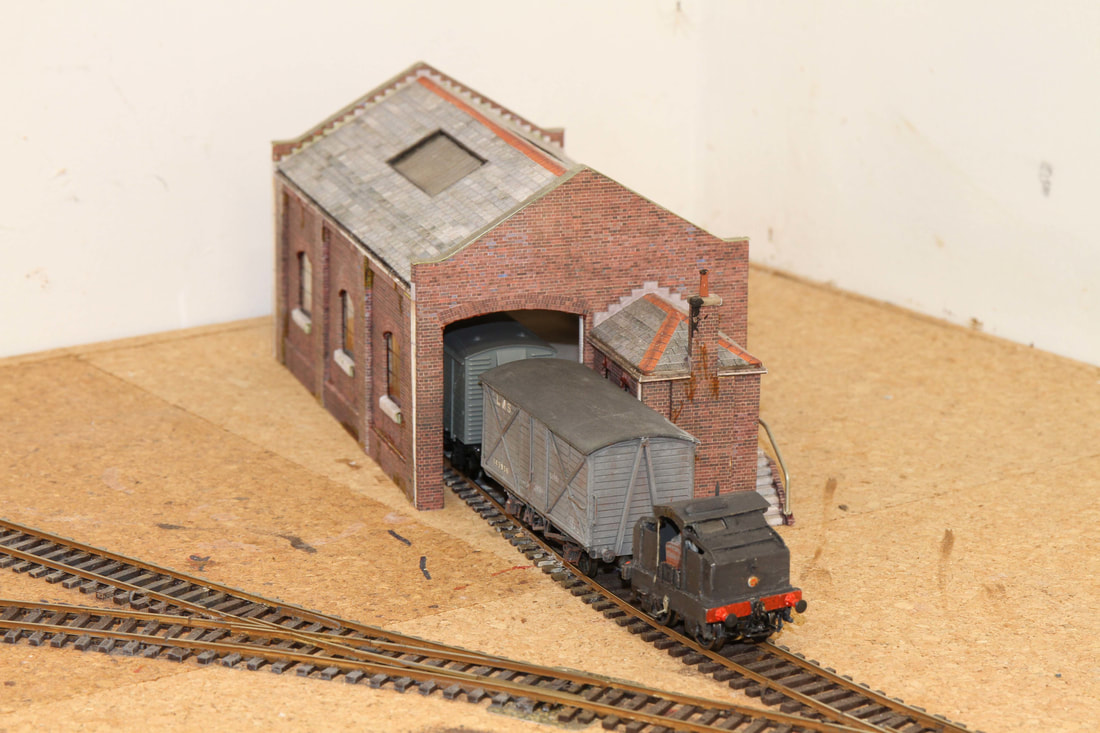 A Simplex shunts two vans into the goods shed.
Carlsby has moved forward considerably since the last update! The track is now ballasted and the loco depot has acquired offices and a “coal hole”, these are all from the “Townstreet” range of ceramic buildings and there will soon be a sand furnace house from the same range. Water columns have been added and wash-out hydrants can now be found just outside the shed building, more hydrants are being sited near the ash pits at the “coal hole”. More visually arresting is the 50’ manual turntable which now forms the end of the yard and is a fully automatic feature built from a “London Road” brass and nickel silver kit, motorised with a very precise “stepper motor” and control board produced by the Model Electronic Railway Group (MERG). This allows for all the required positions to be memorised and accurately reached with all but the longest wheel-base locos so far using the shed. The turntable not only allows loco turning, but as in many depots with limited space available, allows for road selection as well. A station “stub” is at present being built and having made a modification to the track layout in that area will produce a suitable blind at one end of the operating side of the layout.

Recent loco newcomers include a Sentinel 4 wheel vertical boiler shunter and, almost unique to the “big four”, a Motorail “Simplex” 4 wheel petrol loco. The prototype was one of three absorbed from the LYR in 1923, this one surviving till about 1929! More recognisable steam locos include and Ex LYR 0-6-0ST and an Ex LNWR “Precursor” 4-4-2T. The layout also now boasts a very neat LMS Push-pull coach and a bogie Scenery Van. The choice of freight stock moves along gently and now comprises over 350 wagons many of which are private owner stock of local midland area undertakings. In process of construction at the moment are Midland Railway 2-4-0 and 4-4-0 locos based on the Ratio plastic bodied kits of the 1980’s with lots of detailing mods and my own chassis/ motor combinations. A “Claughton” class 4-6-0 is awaiting professional painting (It’s too good a model for me to spoil!) 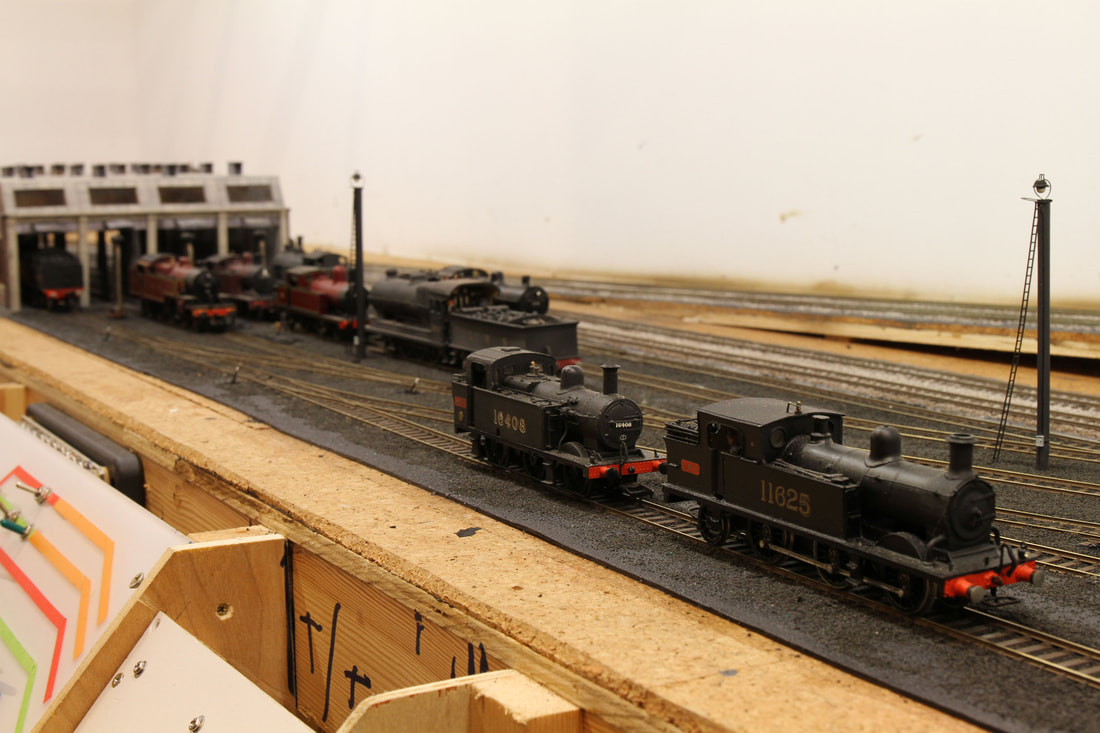 A general view of Carlsby loco shed.
Another little project completed in the Covid-19 lockdown.  This LMS fish van (see below)  is constructed from a Cambrian kit with many Maygib detailing parts.  The vehicle is finished in the 1925 NPCS (Non Passenger Carrying Stock) livery, similar to taht carried by milk vans of the same era. 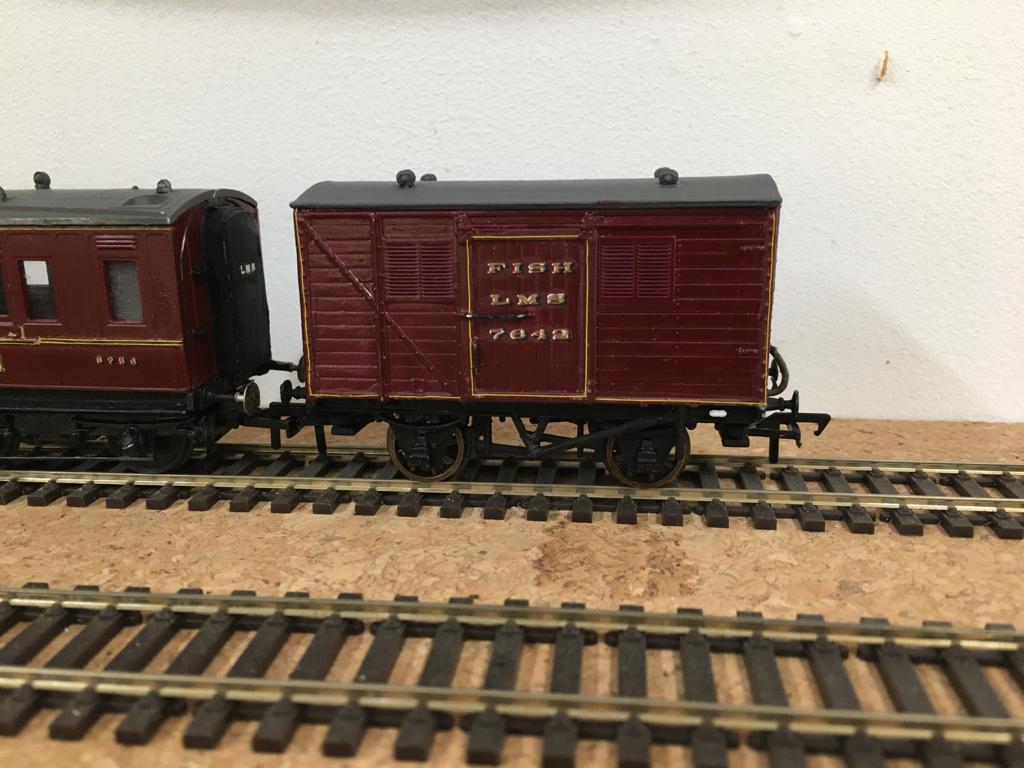 The LMS fish van in the 1925 NPCS livery.
A new addition to Carlsby is this Sentinel, it's always looked upon by the likes of Ian Allan as a variant of the standard box like units that had a spell of popularity in the '30s. However this was a single speed industrial unit, much smaller than the boxy ones and at about 100hp was not the most powerful loco in the sentinel range. It's quoted maximum speed was 9mph! It was unique in that it was the only truly industrial loco owned by any of the "Big Four". It spent most of it's working life at the top of Clee Hill quarries incline, even having a tiny shed, (sub to Shrewsbury LMS  with a manning of 3 men). (info from Hawkins and Reeve LMS Engine Sheds). It spent some time at Sutton Oak (St. Helens) later in it's life and was withdrawn as BR 47184 in the early 1950's. The model is a 3d printed body and details on a Hornby Ruston 48DS chassis. I have found a Clee Hill Quarries truck body to fit onto the generic truck chassis that acts as a pick up extender for the very short wheel base of the chassis ( though it is not wired up in the video since it seems to run well on my layout without it. 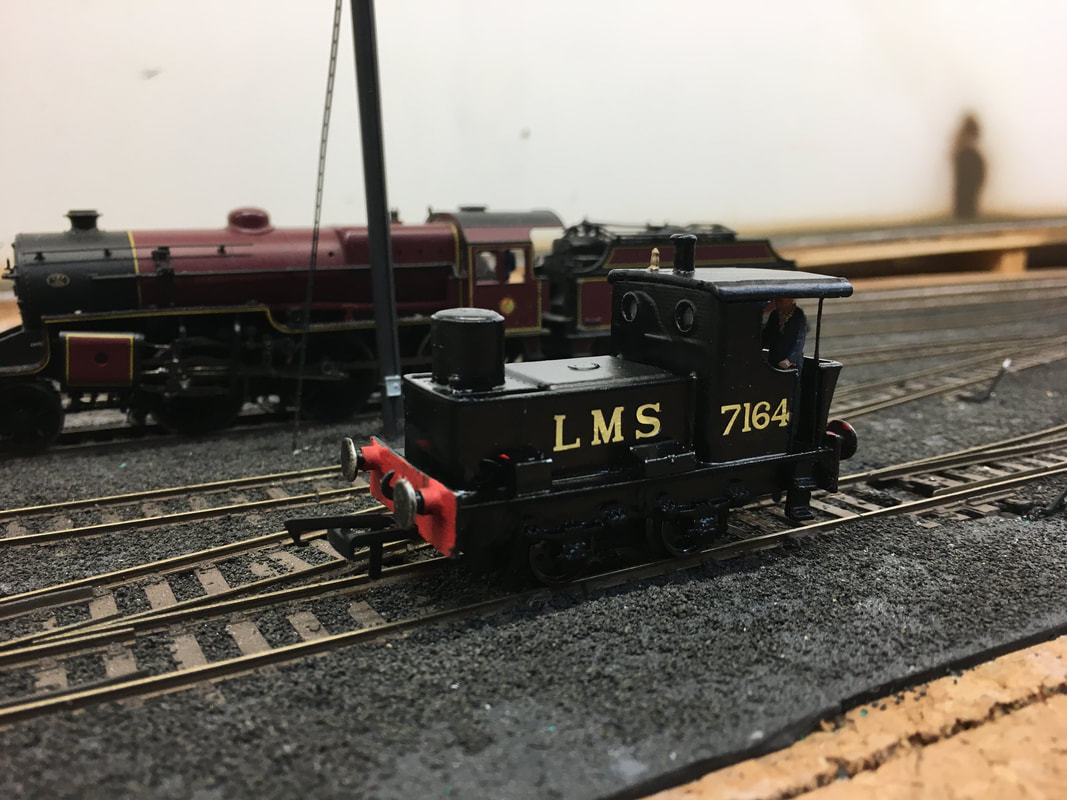 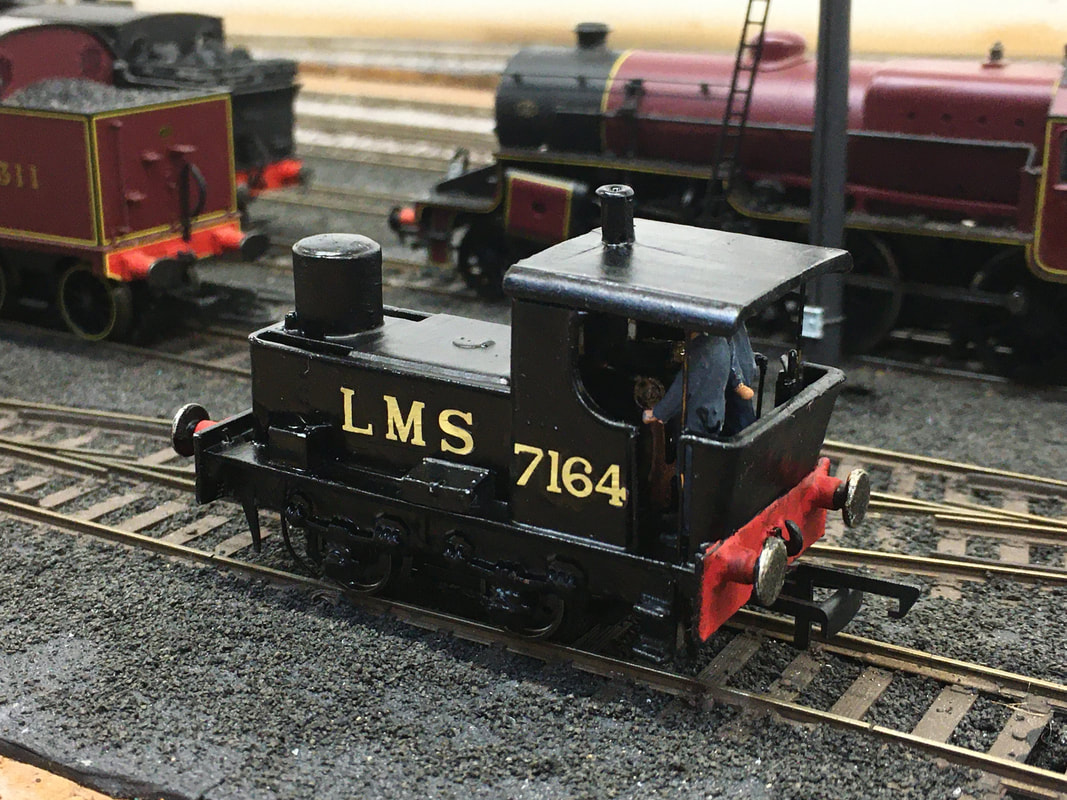 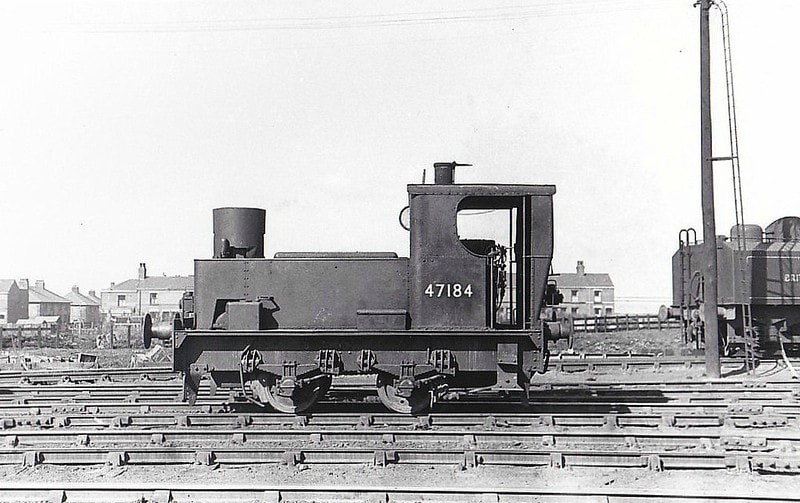 A view of Sentinal 47814 on which the model is based. (Photographer Unknown)
Another kit completed during the lockdown was this LMS beer van.  One of a hundred vans built in 1929, they ran largely from the Burton-Upon-Trent area. 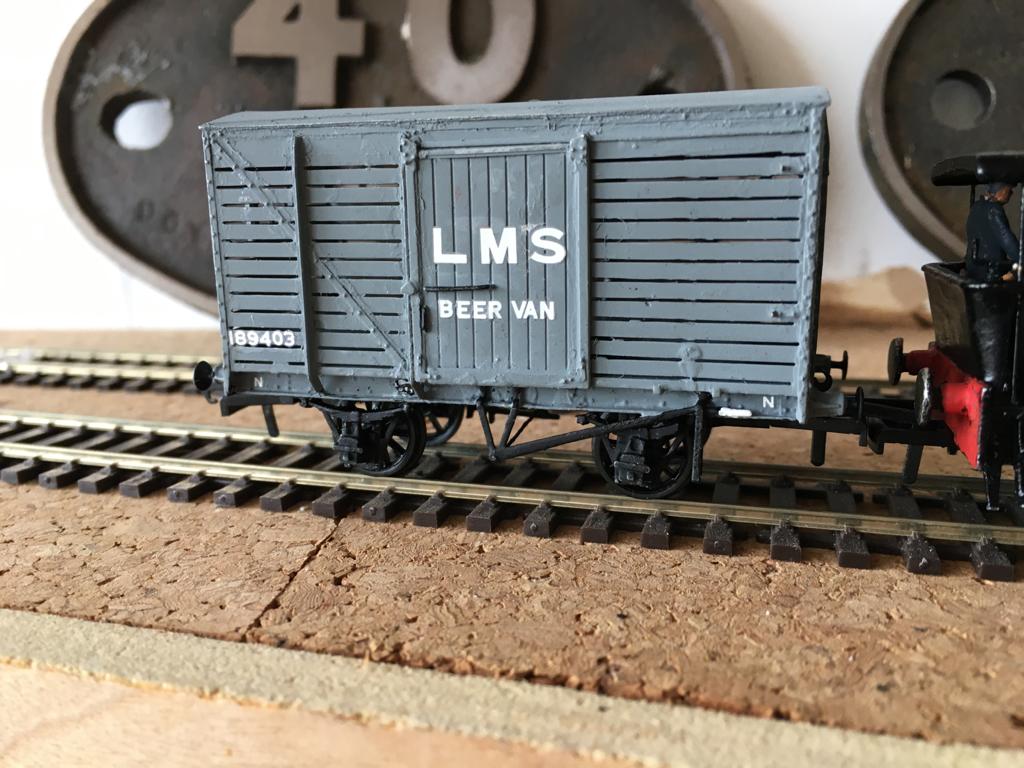 The LMS beer van with its open slated sides to keep the load cool.
The latest addition is a 20 ton “long low” wagon of 1930.  The kit is Blacksmiths, wholly brass with a one piece folded body.  The chassis is also largely in one piece with overlays and strengthening members. 400 of these were built to this diagram with many more built later in the 1930’s. 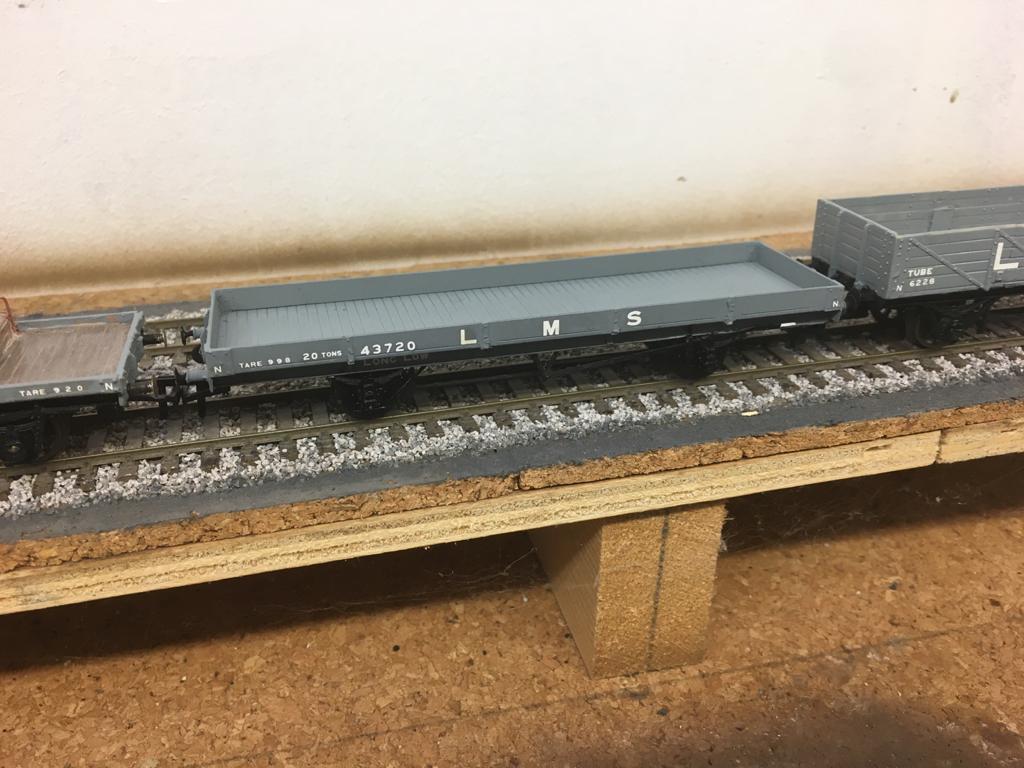 The LMS 20 ton “long low” wagon of 1930.
Another little gem with gesturing guard, I’ve one more to make, maybe the next guard will come from the naughty Preiser range?  Check back here soon! 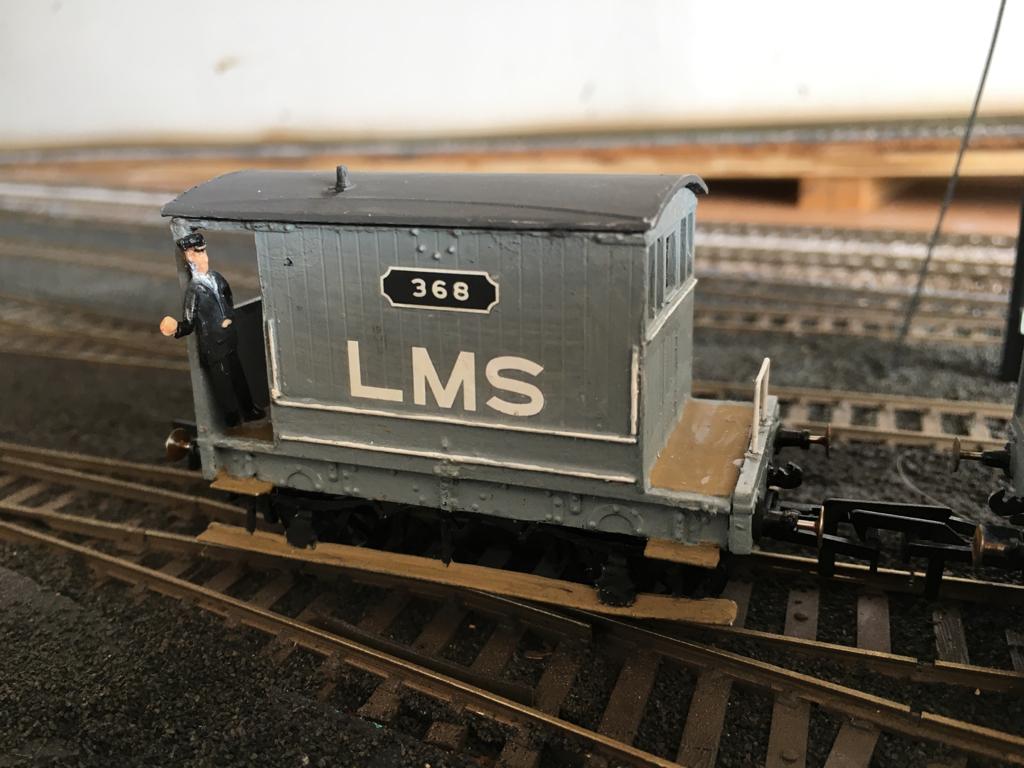