Elcho at Hayle Rail May 2013. Photo by Andy Cavill.
Elcho is a real place on an imaginary line built by the Highland Railway.  On reaching Perth, the HR extended its running powers south to Friarton, where upon it constructed a line along the south bank of the River Tay to Tayburgh.  Tayburgh (if it existed) would lie at the confluence of the River Tay and the River Earn.  On route the line passed through Elcho, a small village with a rather pleasant, and remarkably well preserved castle.

This is the second incarnation for this layout.  Originally built as Kentside by Karl Crowther, he sold it to a friend of mine, Tom.  When Tom moved house, he decided to offer the layout for sale.  I purchased the layout which consisted of the track, wiring, basic scenery and some rather splendid point rodding.  There were no buildings, back boards or stock.

It was this purchase then that provided me with a canvas on which to create my own reality.  The signal box was given to me by a late friend and this had to be incorporated in to the layout.  The goods shed was partially built by my friend Ian for a club layout some twenty-five years ago, which never materialised.  It had suffered somewhat during its prolonged storage, but with some work it was usable.  The station building is based on Plockton and was built from scratch using enlarged plans from an old Railway Modeller and my thanks go to Dave Curtis for his drawing skills.

All photographs are by the author unless otherwise stated. 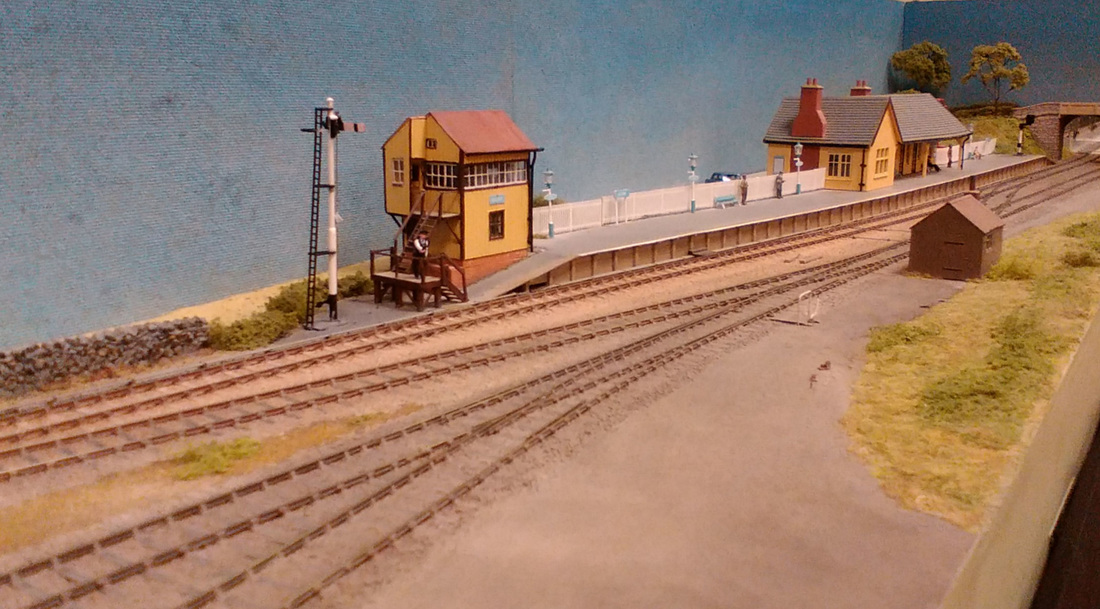 An overall view of Elcho looking towards Tayburgh. 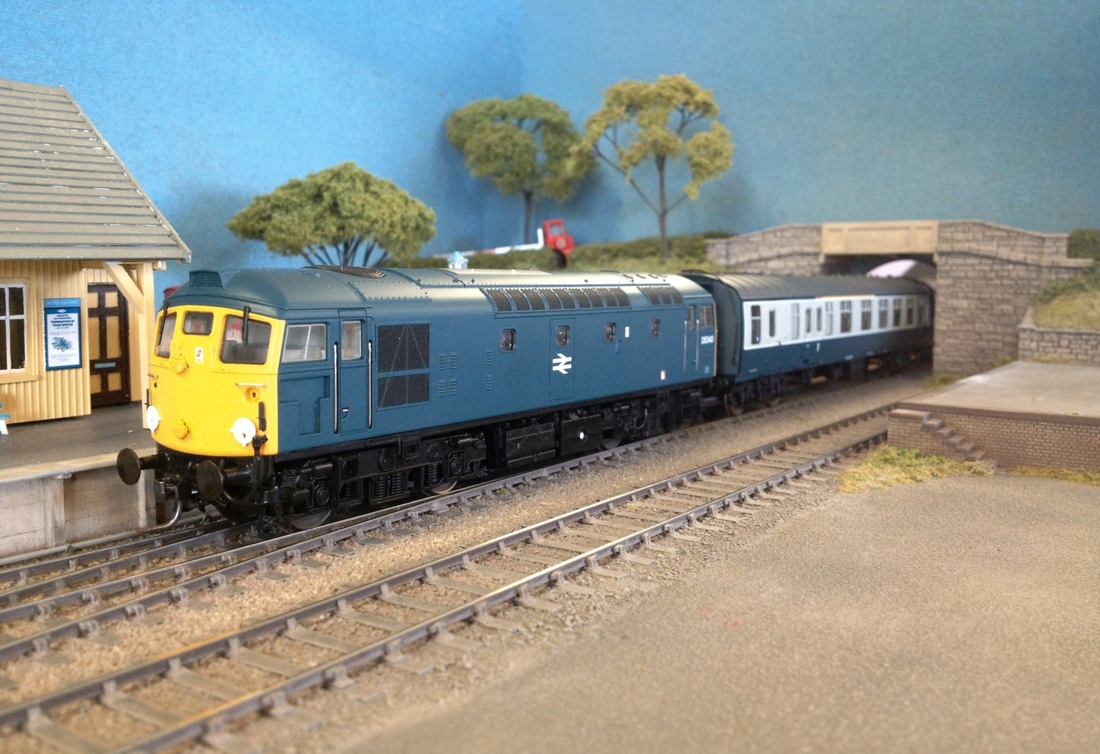 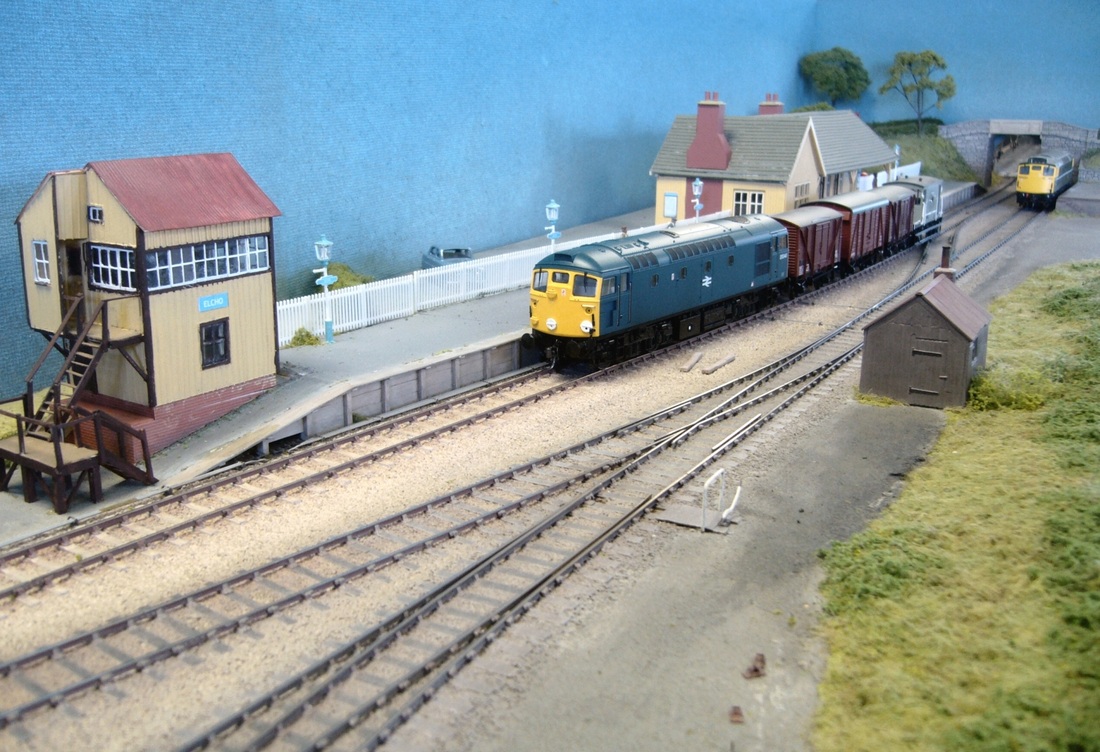 Class 26, D5340 pauses at Elcho with a short goods train bound for Perth. Green liveried Class 27, 5377 is stabled in the siding by the bridge. Photo by Stephen Clemo.
The signal box was originally in the Highland Railway livery of burnt sienna and purple brown.  It was repainted into brown and cream, a common colour scheme for buildings in Scotland during the fifties and sixties.  At the same time the glazing was renewed using Lochgorm window frames.  Also a token changing platform was added, which provides for an interesting talking point. 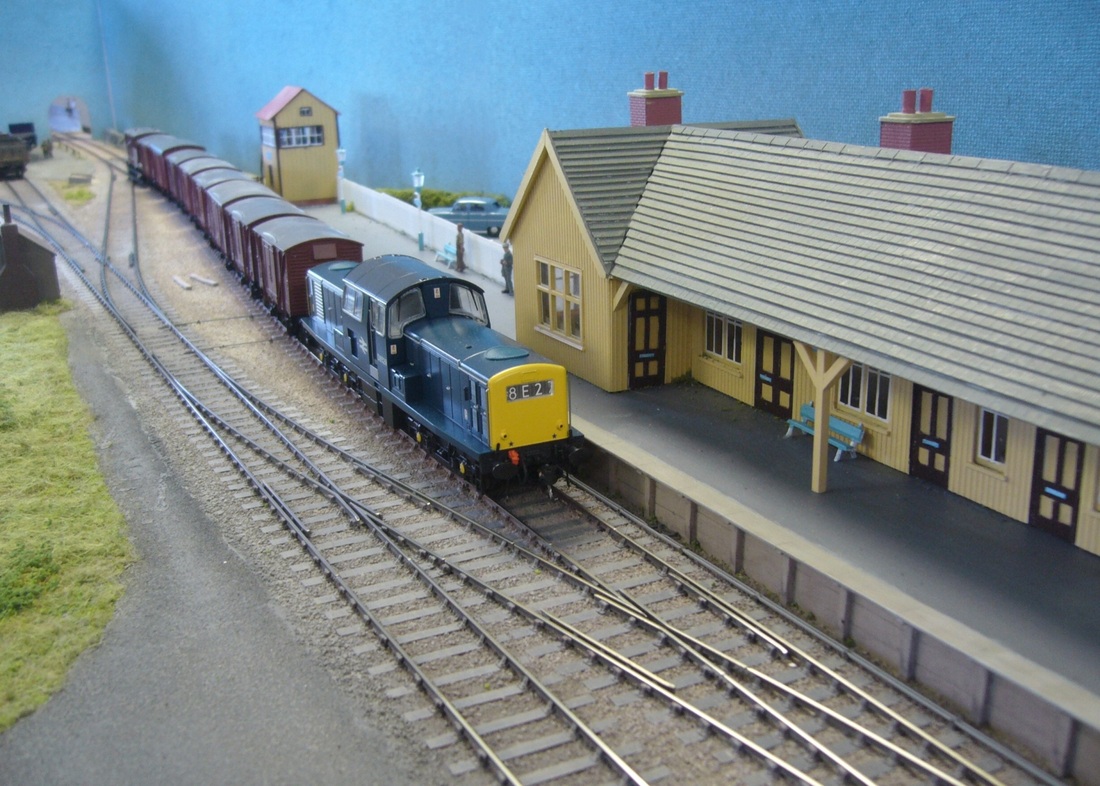 Clayton Class 17, D8529 trundles through Elcho with a van train for Tayburgh. Photo by Stephen Clemo.
The station building was built using Evergreen board & batten plastic card, with the roof made from Slaters tiling sheets.  My thanks must go to David Curtis for the windows, drawn using a bow pen on clear acetate. 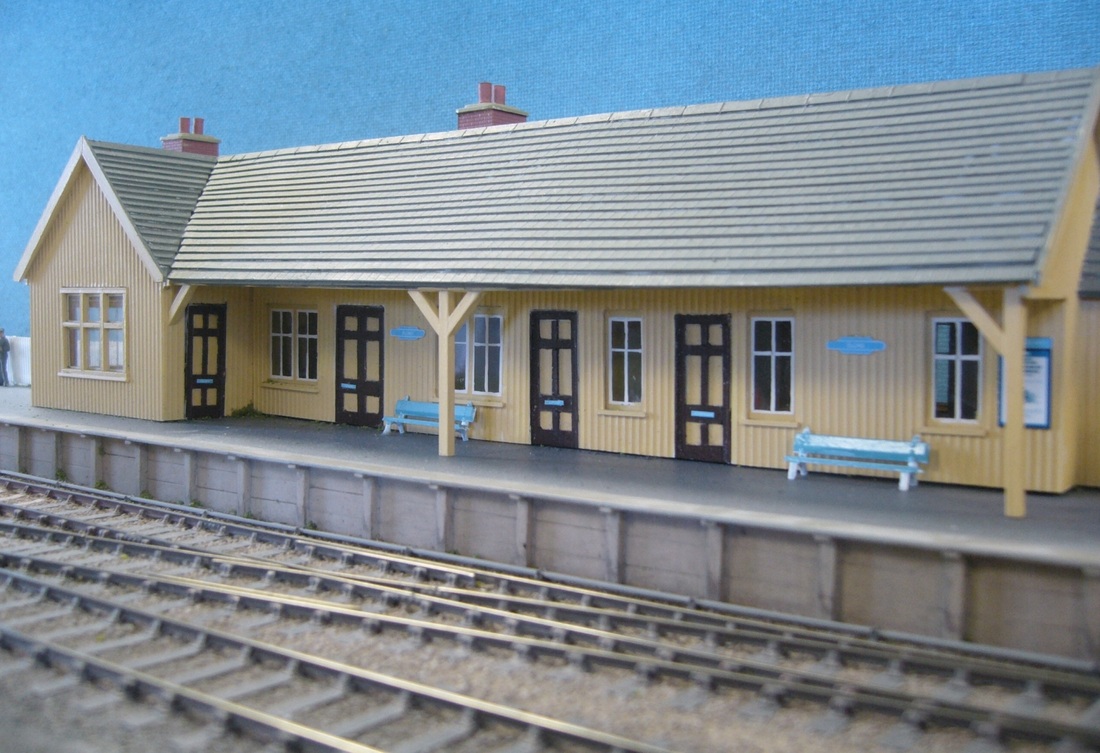 A close up of the station building. Still lots to do here, such as adding gutters, drain pipes, etc. Photo by Stephen Clemo.
A new semaphore starter signal has been installed at the Perth end of the station.  This is the Ratio LMS/BR(M) kit and was widely used after nationalisation.  The signalman is ready to exchange tokens with the train driver. 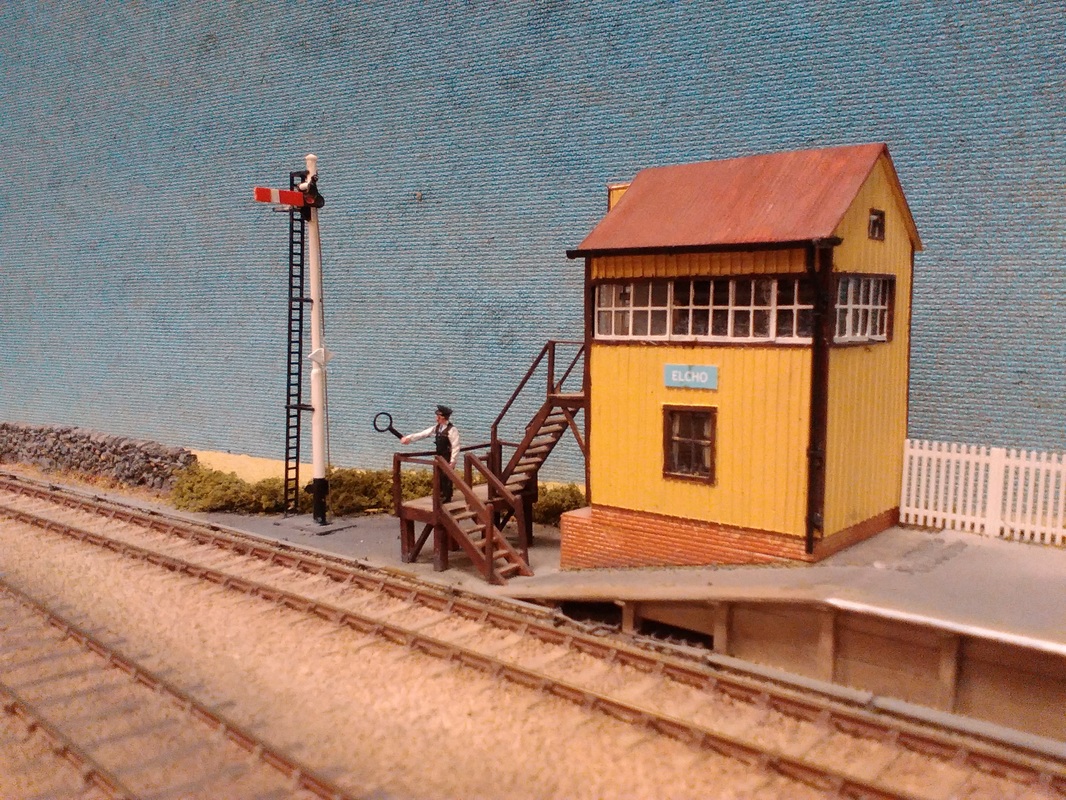 The up starter signal and signalman wth train token. 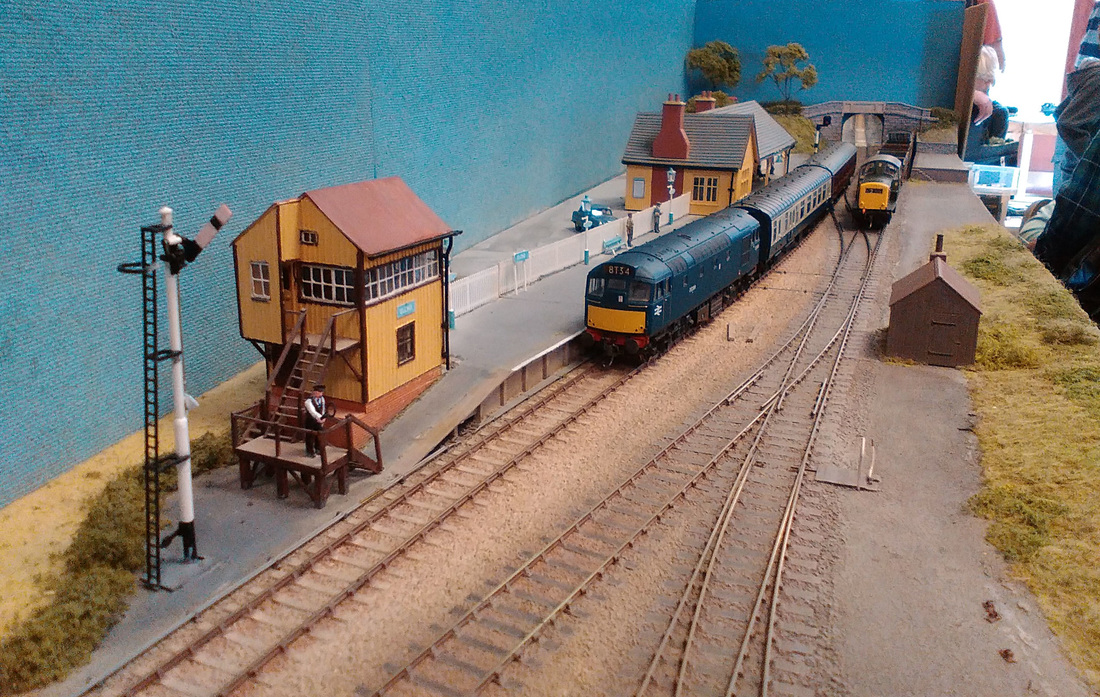 D5389 departs Elcho for Perth, while a Clayton sits in the yard with some empty coal wagons. 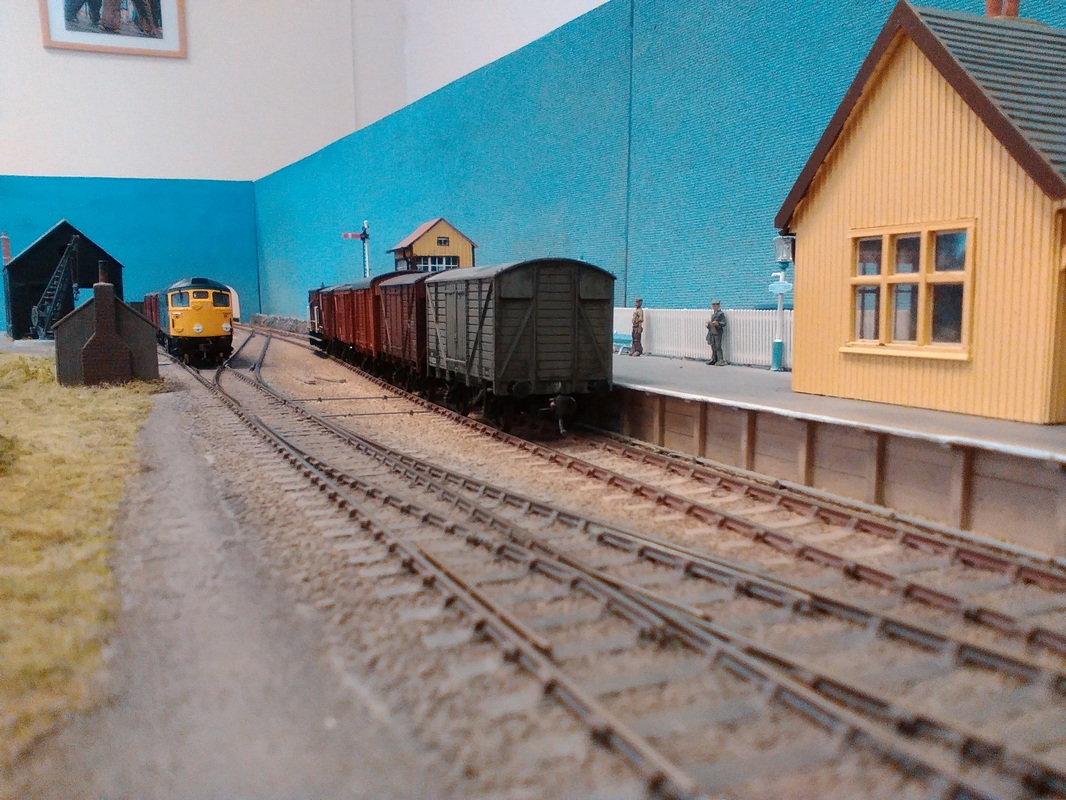 A view as an Elcho railway worker might see. A clss 26 shunts vans off the daily goods. 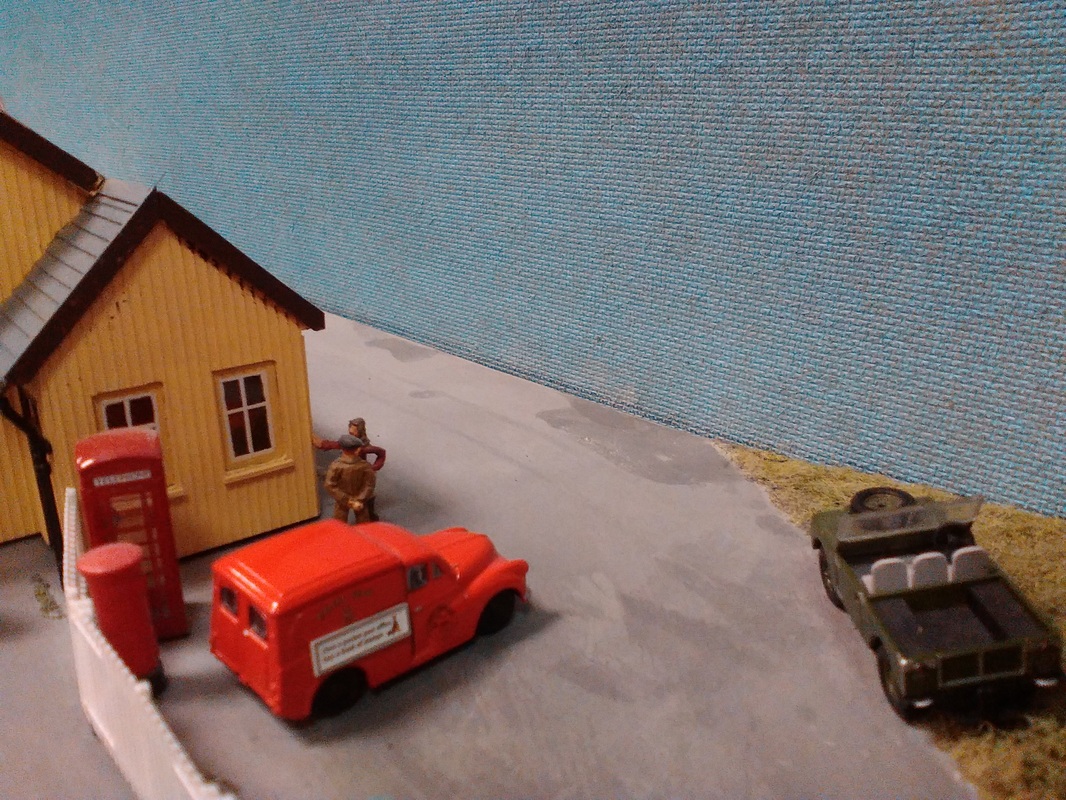 Humour is important in life. In this cameo scene, the postie has gone for a cup of tea with his railway mates, while the soldier has borrowed the land rover to meet up with his girlfriend.
Wih the scenic part of the layout set up at home after our recent open day, the opprtunity was taken to get a couple of photos of the green Heljan Class 17.  I have two of these, the other one being BR blue.  They are lovely engines and capture the character of the prototype well.  They will be weathered in due course, along with the rest of the stock.  The other job on the list is to add some features to the backscene.  The view here is looking north towards the Tay River, so the that will need to be included.  Behind that are the hills of Perthshire.

Class 17 No: 8561 stands by the goods shed, while the signalman waits for the Perth - Tayburgh passenger service with the token. 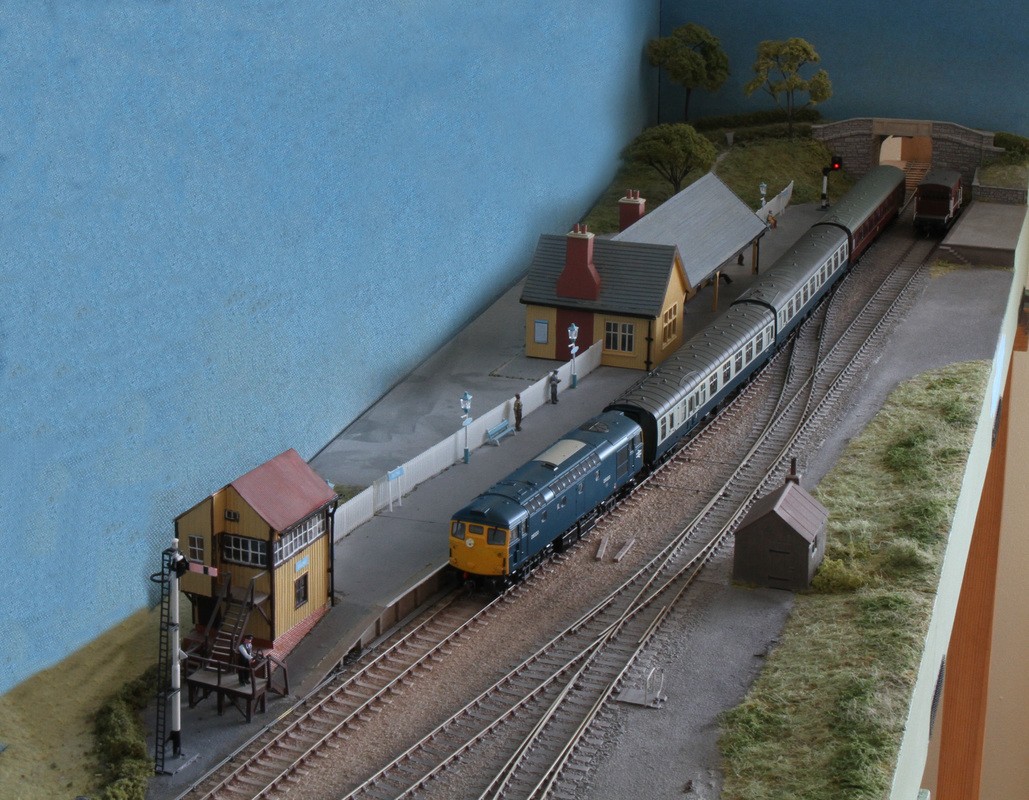 D5320 stands at the platform with the daily Tayburgh - Edinburgh Waverley service, which will reverse at Perth. 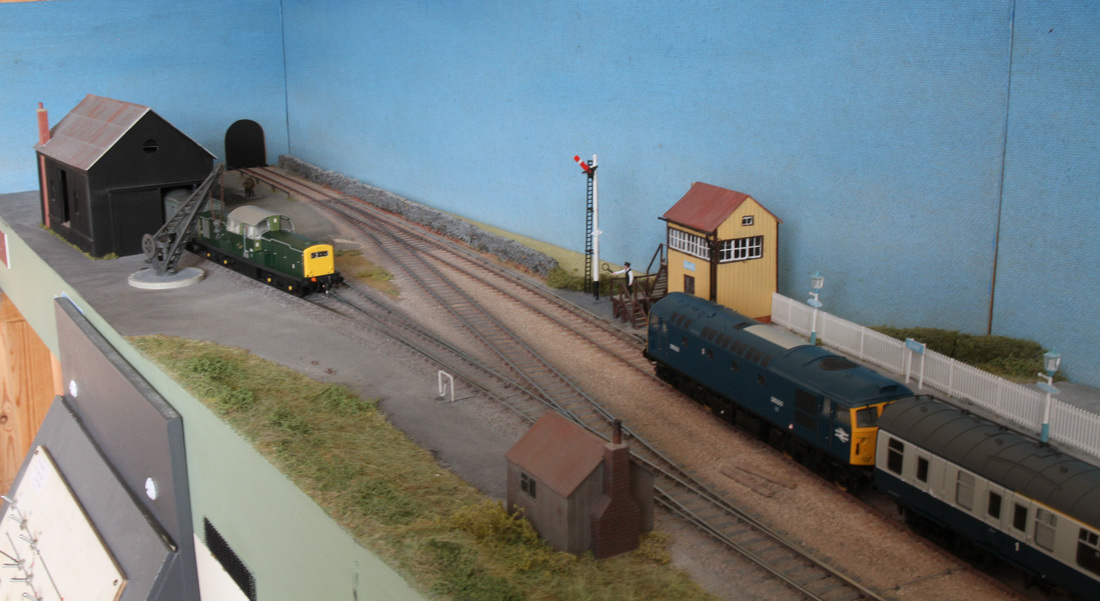 With the board off, D5320 pulls away with the daily Tayburgh - Edinburgh Waverley service. Class 17, 8561 waits in the goods yard before proceeding to Tayburgh with the daily goods. 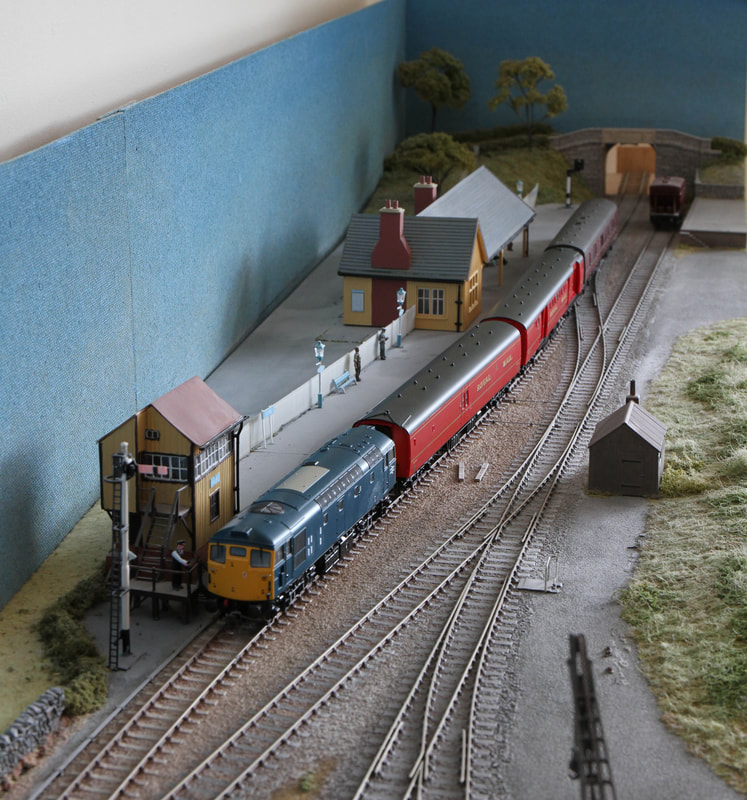 A bit of a rarity, an unidentified Class 26 heads through Elcho with the short lived Tayburgh - Thurso TPO.