We have decided to start on a new small layout which will incorporpate our current St Budock diorama.  St Budock station is to be set on the western edge of Falmouth roughly where Budock church is.  The story starts with the ill fated 'Falmouth, Penzance & South Cornwall Railway', which began contruction of a line from the Cornwall Railway at Tregenver Junction (just north of Penmere station) in Falmouth, heading west to Penzance, where it would have rejoined the West Cornwall Railway at Marazion.  Unfortunately, the company ran out of money due to the expense of building a viaduct to bridge the Swan Valley.  The short section of line which existed was operated as local branchline to and from Falmouth.  Passenger traffic was always light, although early morning and late afternoon trains were popular with docks workers.  Goods traffic was mainly connected to farming related materials and general merchandise, including coal.

St Budock has been used as a diorama  to display rolling stock for photographic purposes and now we have decided to develop it into a proper layout in its own right.  The options considered are shown below.  We have decided on the upper layout, with the goods yard beyond the station.  This will provide some operational interest and mean trains are on view longer.  A protoype for this type of track layout existed at Fairford in Gloucestershire.  A similar arrangement could be found at Hemyock in Devon, where the line exteneded beyond the station to serve the creamery and at Looe where the railway served the fish wharves.

The first job is to construct the baseboards for the goods yard and the fiddle yard.  These will have the same dimensions, enabling them to be transported as a box.  The boards will then be joined to the station board and provided with legs.  Then we can crack on with the track laying and wiring.

We will update this page with information and pictures as this project progresses. 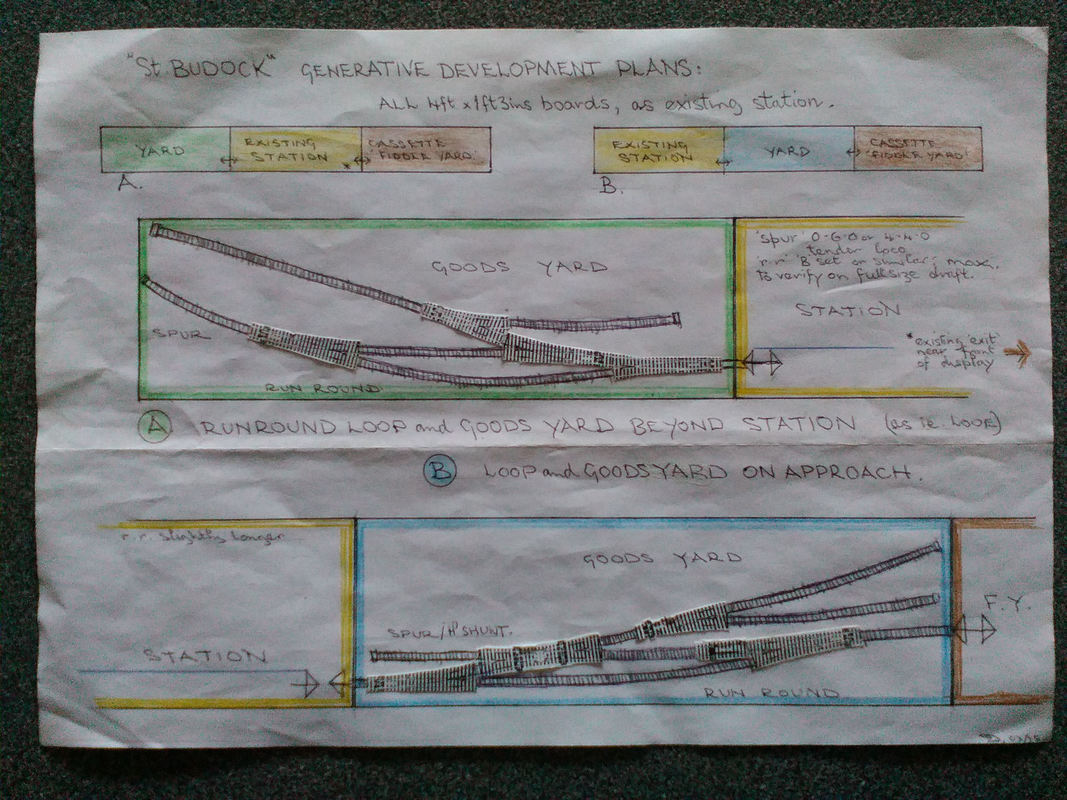 The upper layout has been chosen for the new layout. 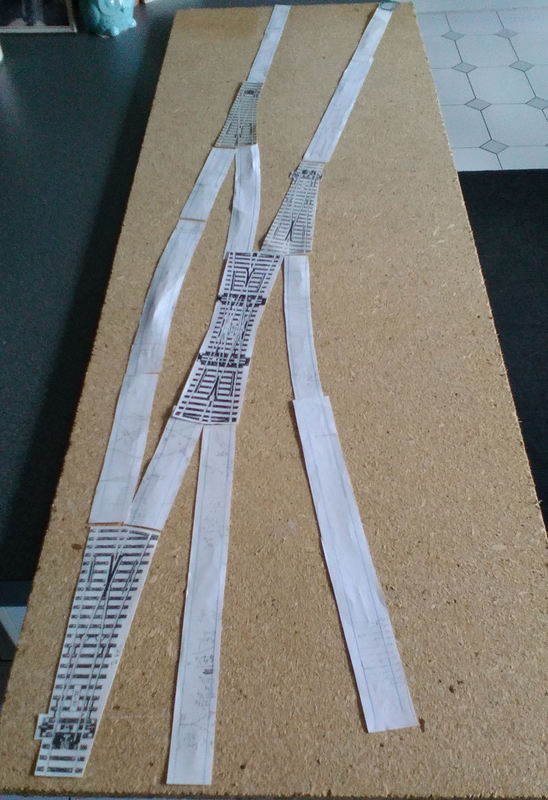 The track layout of the run round loop and goods yard. Using Peco paper plans allows for easy adjustments. 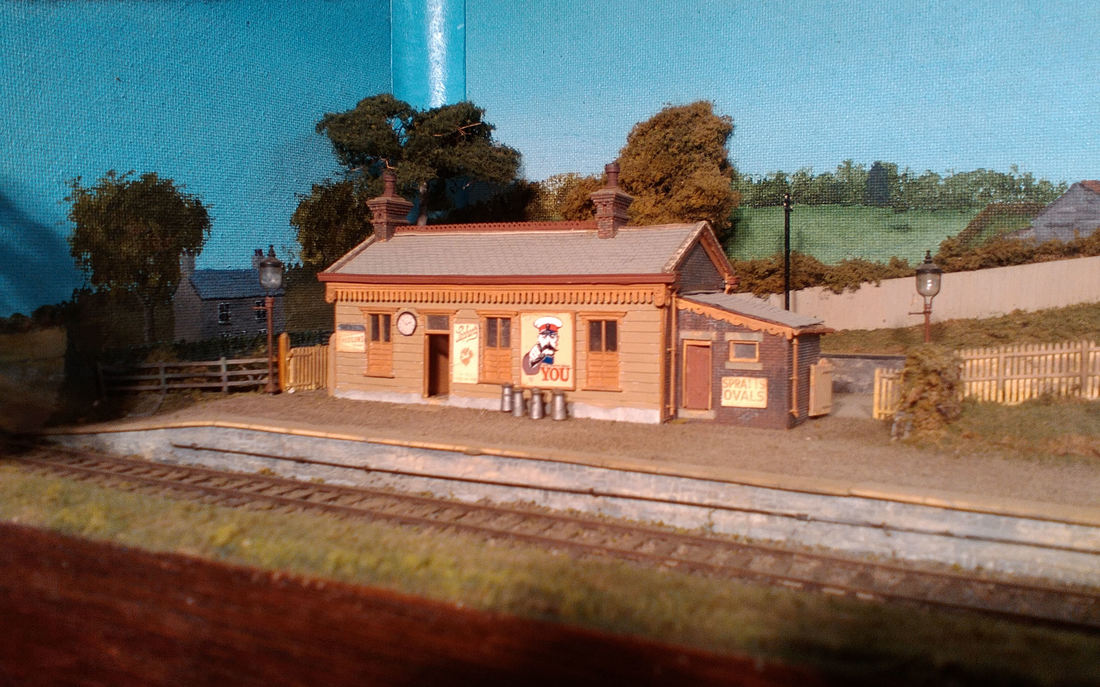 A close up of the station building, the track will continue from here into the goods yard. 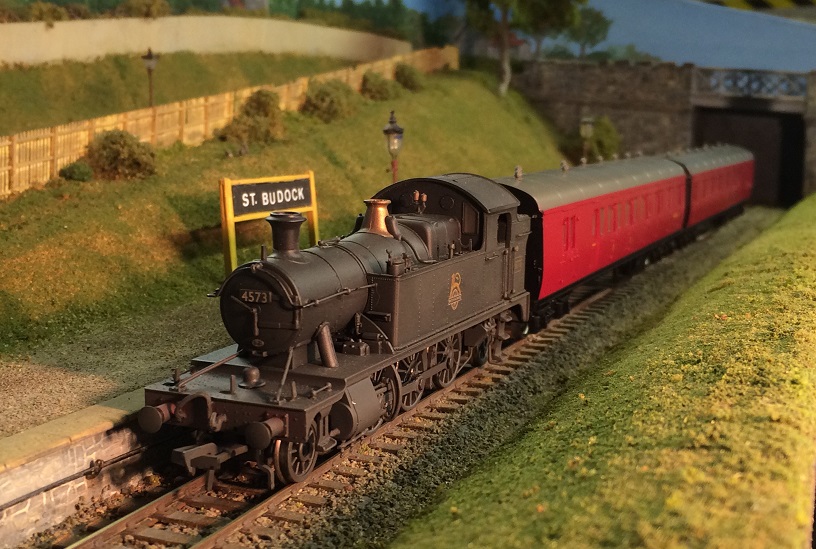 Prairie Tank No.4573 arrives with a passenger service from Falmouth. 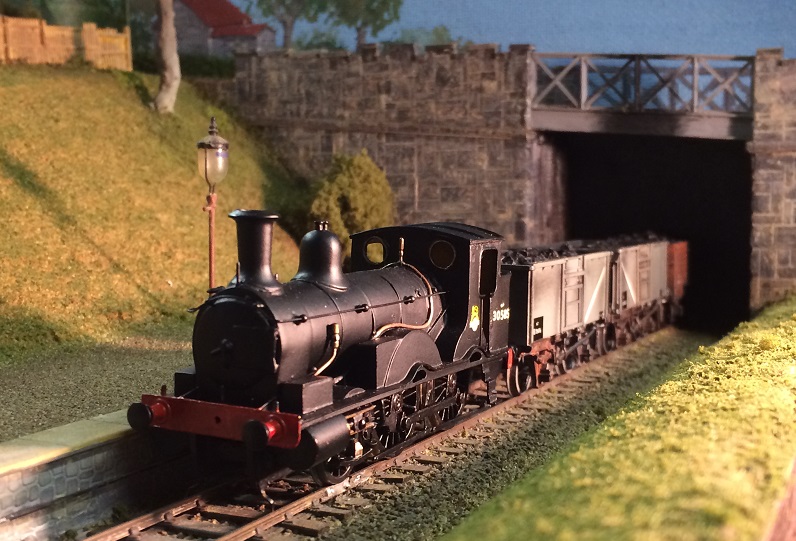 Scratch built Beattie Well Tank No.30585 passes under the bridge with a train of 16 ton mineral wagons. 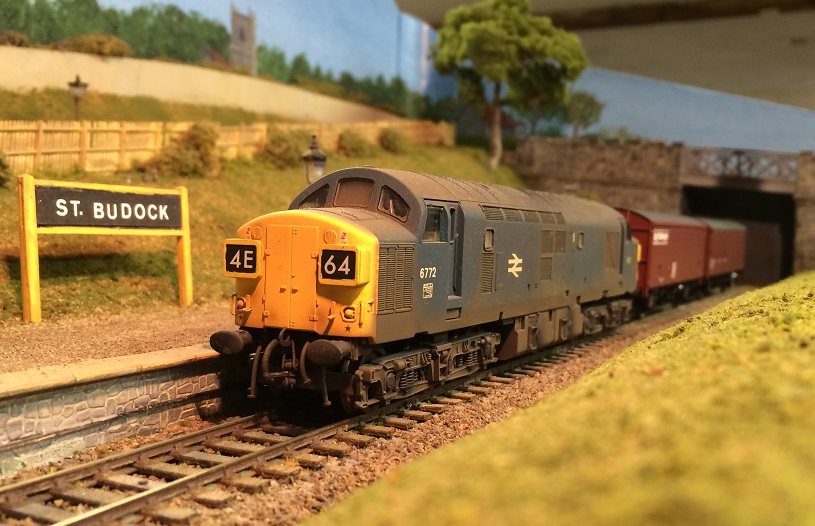 Class 37 D6772 growls past with a couple of VDA vans. The loco is a detailed and weathered Lima model. 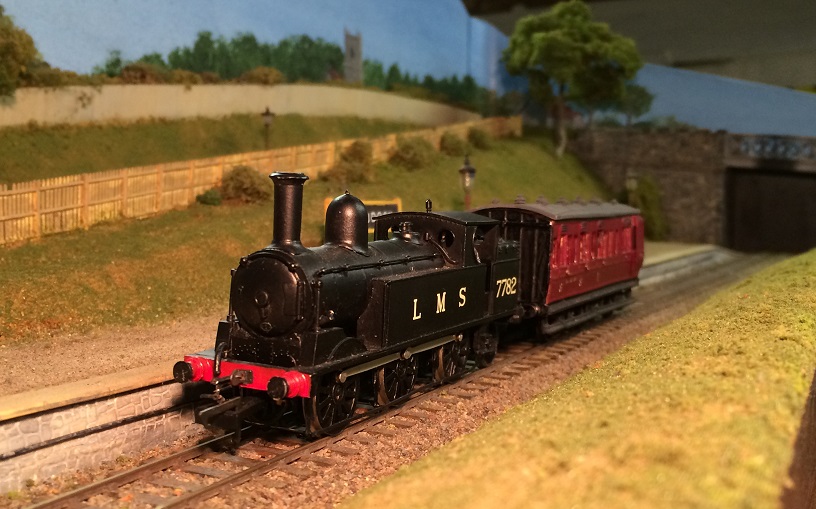 And now for something completely different, Ex-LNWR 2F 0-6-2T 7782 calls at St Budock with a single 4 wheel coach.
In conjunction with a spring flower show in the town, we displayed part of St Budock in the the Town Hall.  The purpose was to depict the Great Western Railway's daffodil specials. 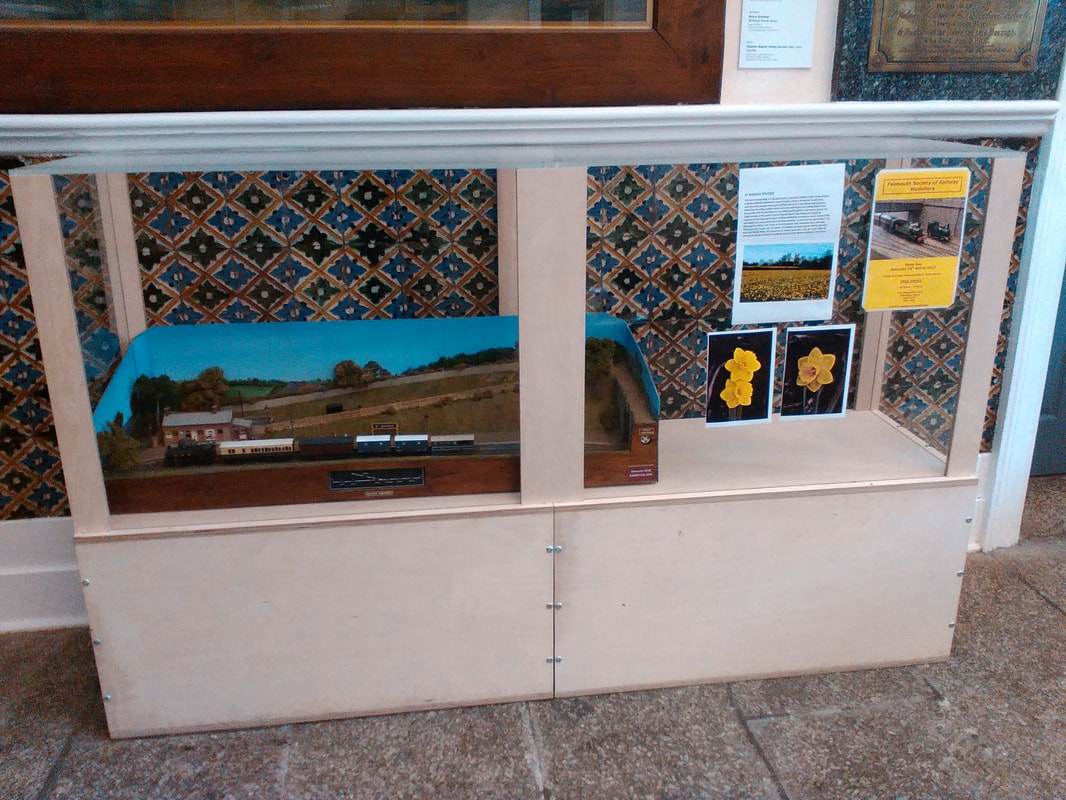 St Budock sation on display in the Town Hall with a daffodil special being loaded in the platform.
The two new boards have now been built and the track purchased, so work on new layout can commence.  The fiddle yard board has been built to allow the use of a cassette system. 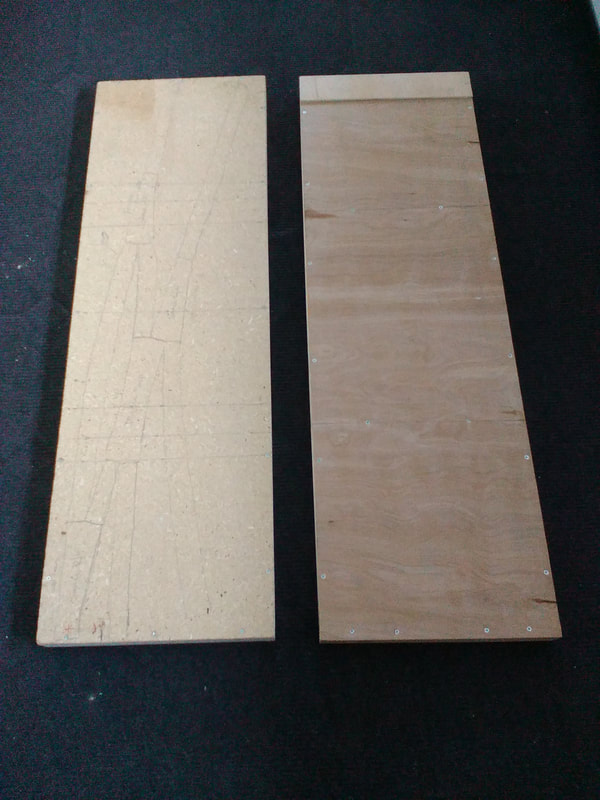 The two new base boards, the goods yard on the left (with the track plan) and the fiddle yard on the right. The raised section at the top will be aligned with the station board, while the cassettes sit on the lower section. 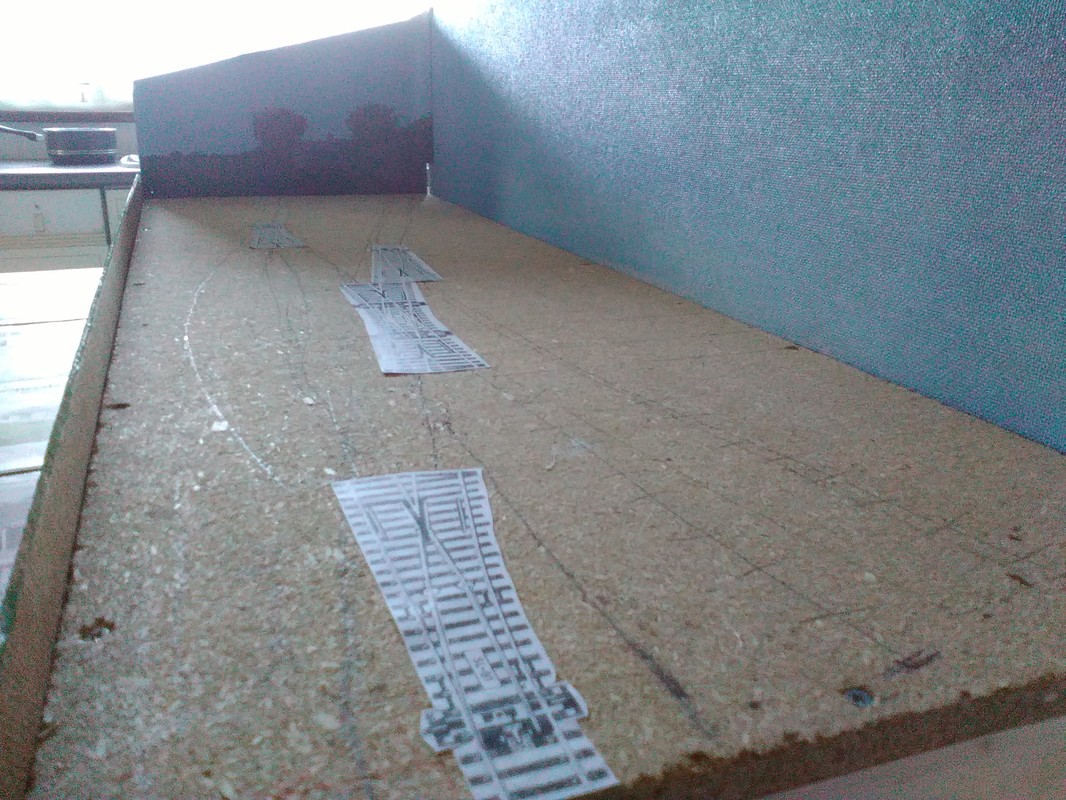 The view into the goods yard from what will be the end of the station.
It's been a little while since we've updated this layout page, but work has progressed on St Budock away from our club room.  The new baseboards have been completed, including fitting Red Dog alignment dowels and a fixing bolt to each board.  A set of legs and braces has also been constructed which means the layout is now free standing.  Some new pictures have been added below. 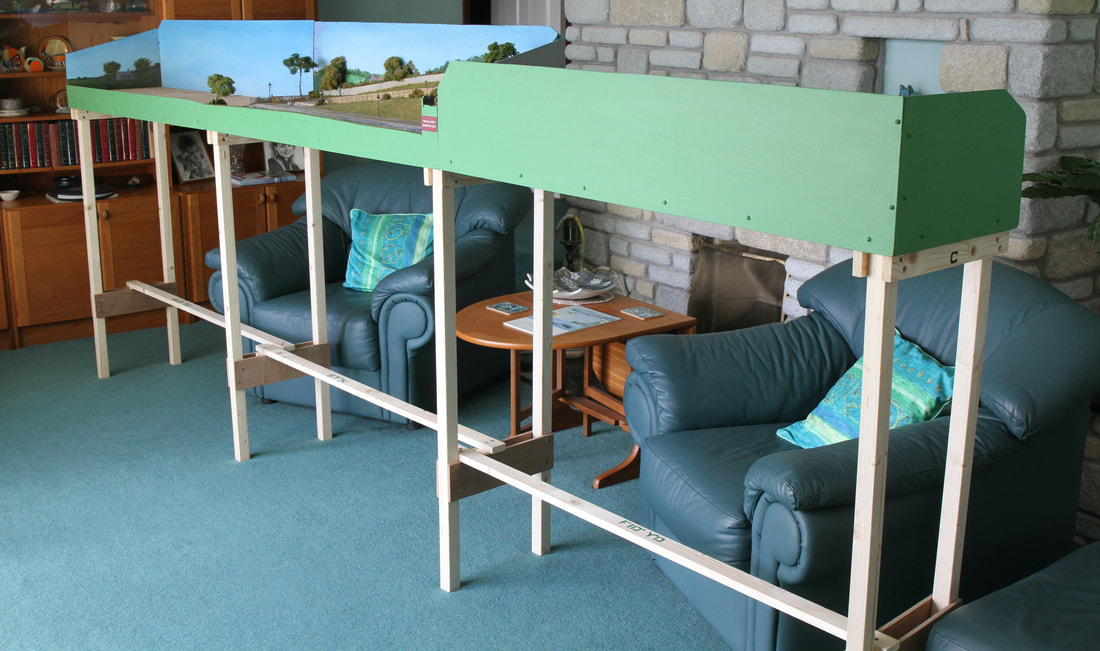 The whole layout set up on its legs. The fiddle yard is on the right hand end, the station centre stage and the goods yard will be at the far end beyond the platform.

A view showing the space for the goods yard and the station.

A view of the station area, with Budock church on the hill.
The cork track bed has been stuck down in the goods yard area, so track laying will start soon.  The basic layout will be very similar to the picture at the top of the page.  Being a compact branch terminus, loco hauled passenger trains will be limited to two coaches, although a three car DMU will fit in the platform.  Goods trains would consist of a few wagons, vans and a brake van.  The headshunt and run round loop mean motive power will be tank engines and smaller 2-6-0s for steam and class 22s, 25s, and 08s for diesels.  No class 66s or 70s here! 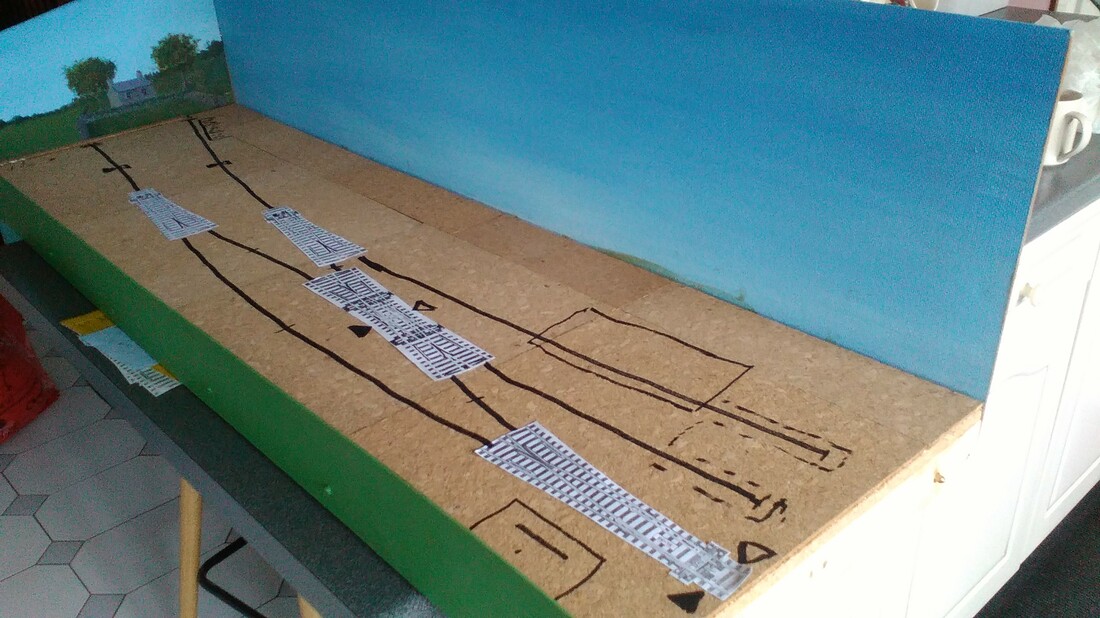 A view of the trackplan drawn out on the cork. Some of the buildings are also indicated, although these may vary slightly after track laying.
A couple of views showing the goods yard.  We decided to use Y point at the yard entrance as it provides for a more pleasing look to the run round loop.  It also means that only locomotives and wagons will use the shorter radius curves.  The loop can accommodate two suburban coaches or a B-set which is adequate for the traffic on this line.  Track feeds have been drawn onto the plan and means that a locomotive can be isolated in the yard while another runs round a passenger train, although this would be unlikely at such a location.  However, when a layout is at an exhbition it's important to keep the trains running. 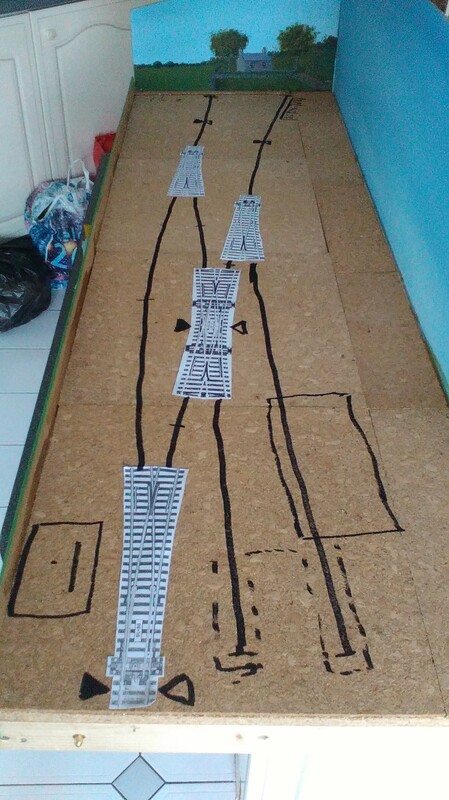 Another view of the goods yard showing the approximate positions of the signal box, goods shed and loading docks. A set of coal drops will be provided at the end of the headshunt on the right.
We have now laid out the track as we think the goods yard will look.  The track was cut and positioned with drawing pins to check alignment.  Some minor adjustments were made to the original plan, so the loop is now slightly longer. 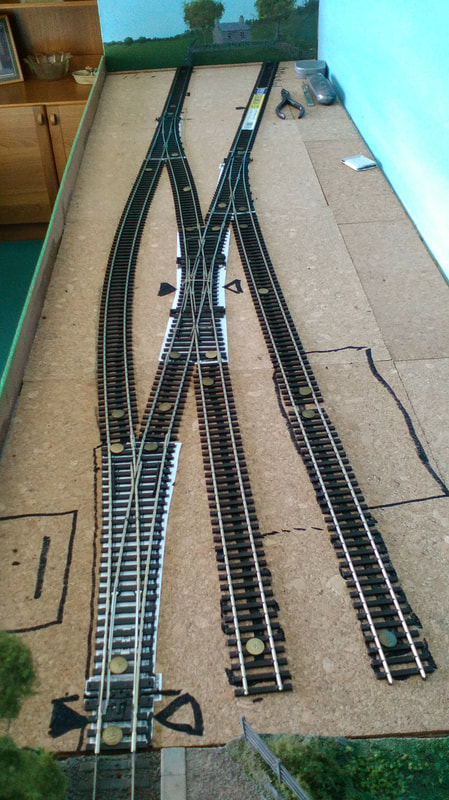 The goods yard at St Budock with the track temporarily pinned in position. 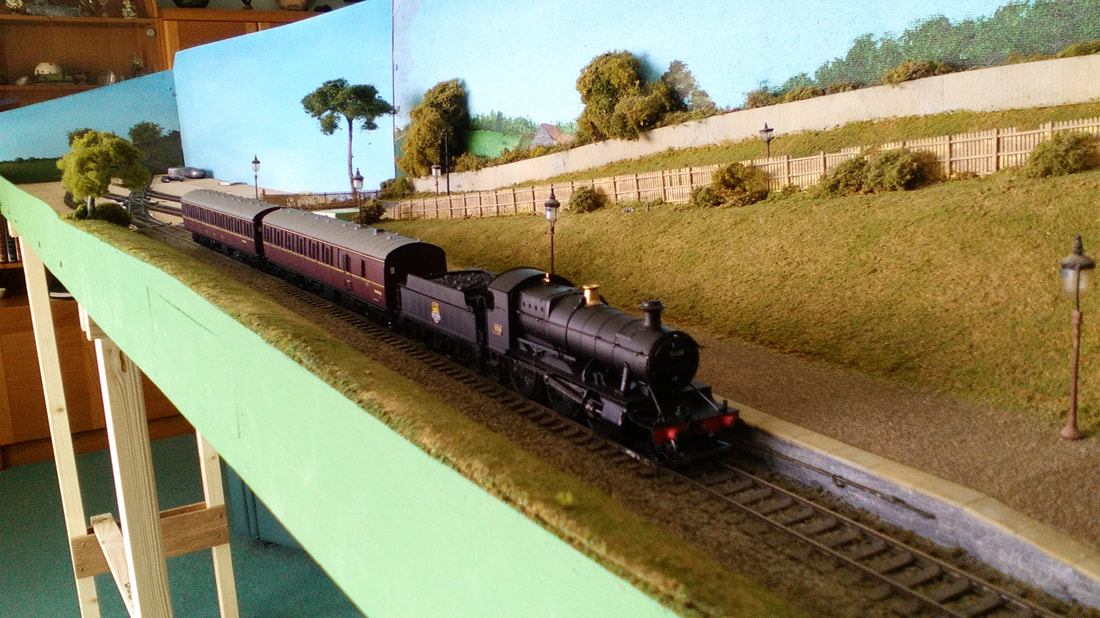 Ex GWR 2-6-0 Mogul No:5328 waits to depart for Falmouth.
The track in the goods yard has been pemanently laid and wiring up the layout is underway.  We hope to have St Budock on show at our open day on Saturday 28th September 2019.  The image below shows some of the wiring which has been installed this week. 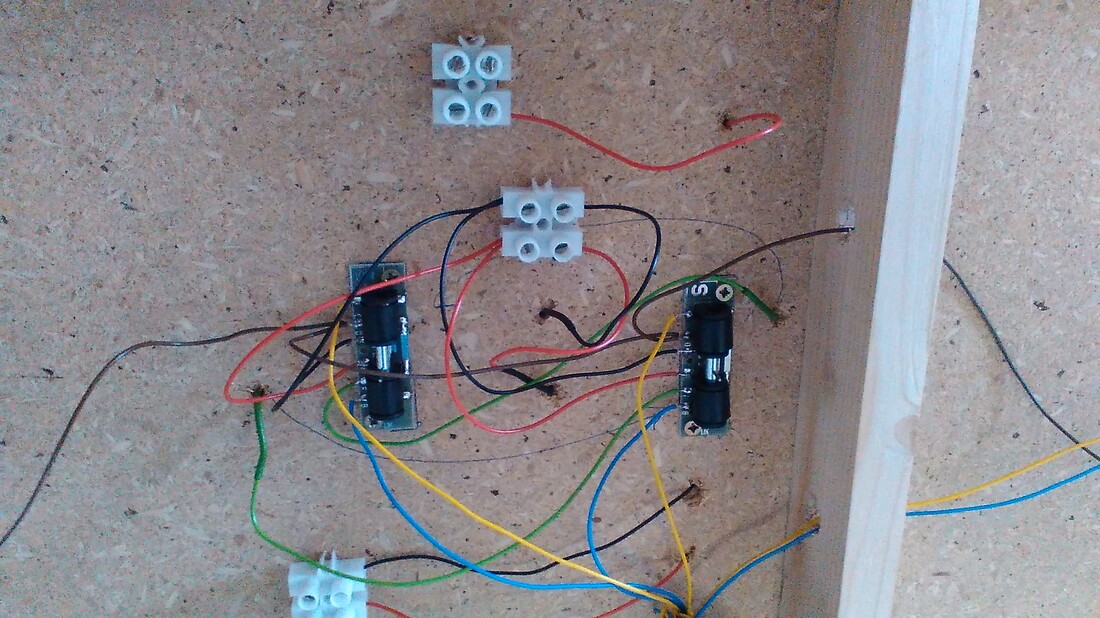 Some of the new wiring on St Budock. This is the double-slip, showing the track feeds (red/black), the frog wiring (green) and the point motor power feeds (blue/yellow), colour coding is essential.
We have now reinstated the building and station furniture as we work towards the layout's first public appearance at our forth coming open day on 28th September 2019. 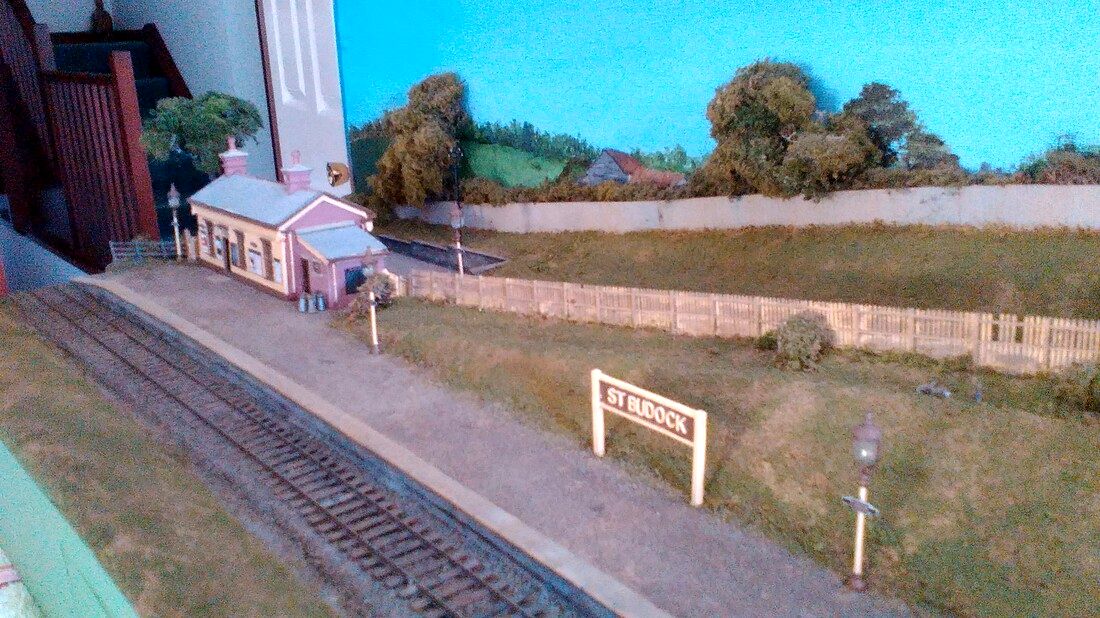 A general view of the station showing the new running in board and the platform lamps. 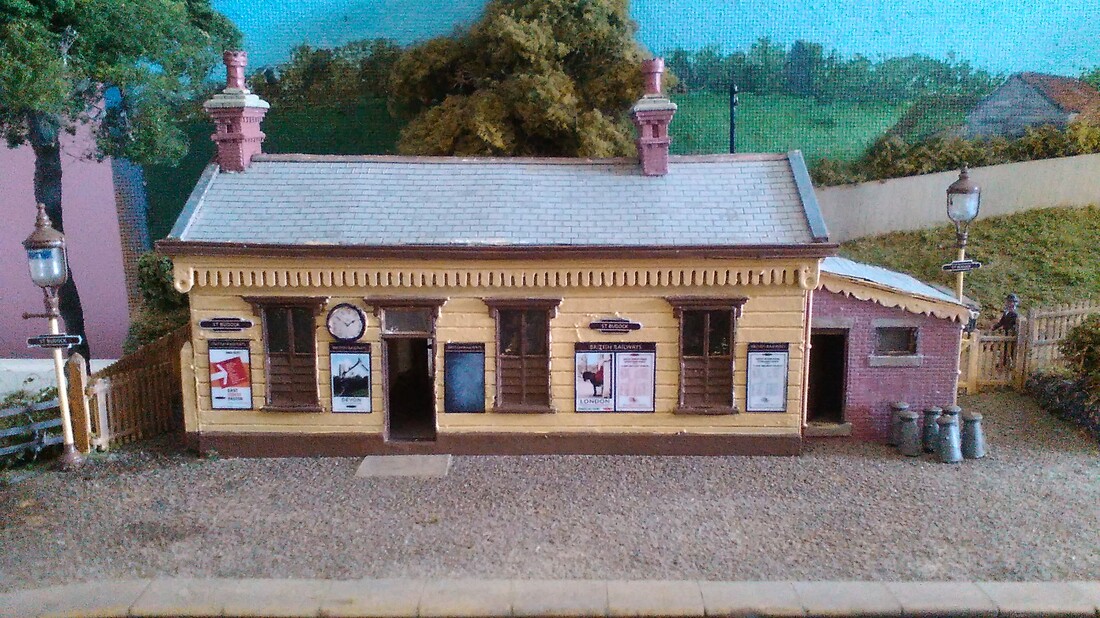 A view of the station building in Western Region colours of brown and cream, so widely seen in the the 1960s and into the 1970s.
Further work has taken place in the goods yard with the wiring now complete.  The road bed has been laid and some scenic work started.  The buildings for the yard area have also been completed.  There will be a goods shed, weighbridge and coal office with staithes. 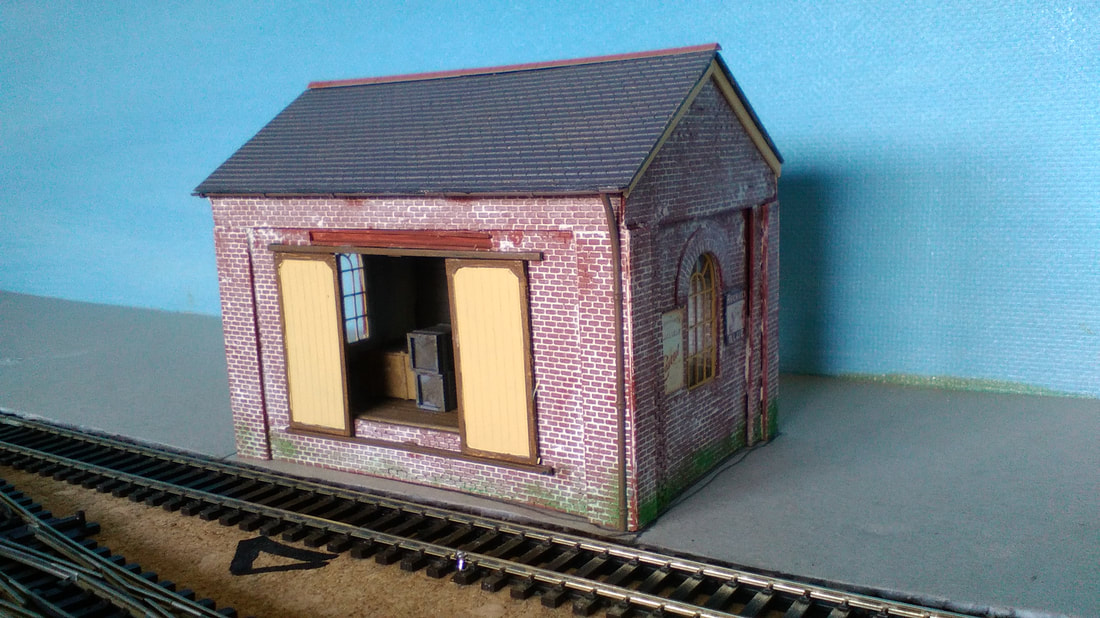 The goods shed is built from a Craftsman kit,
With our autumn open day fast approaching, we have started to put some formers for the scenery in place on the goods yard board.  These are strips of cardboard from a cornflakes box, I won't mention names here, but the boxes are all much the same! 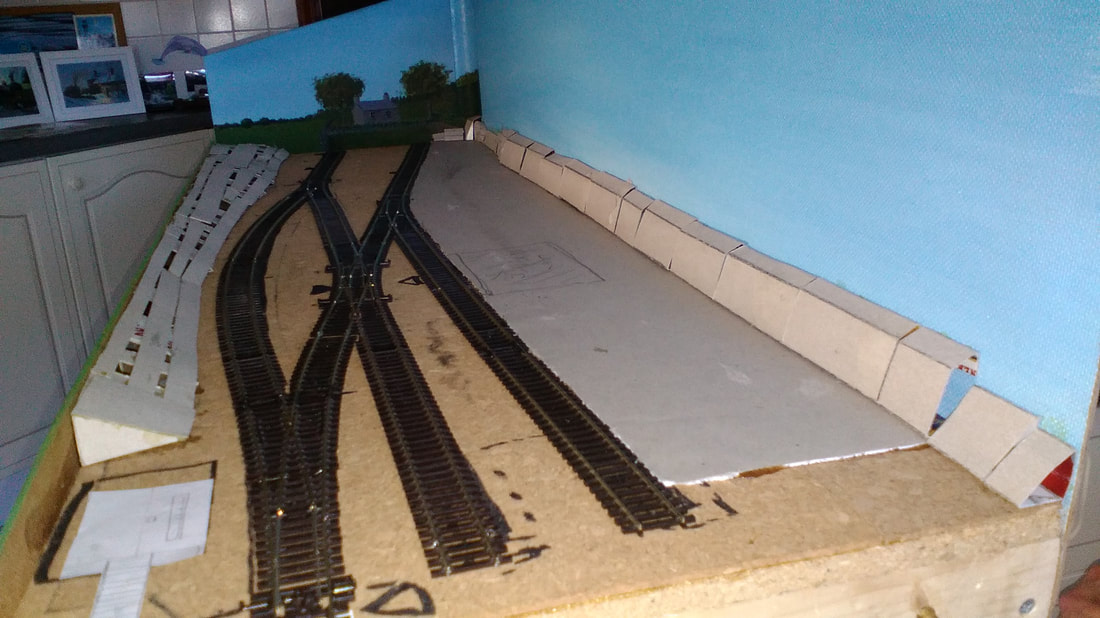 The cardboard skeleton is in place, these will be covered with a plaster impregnated bandage. 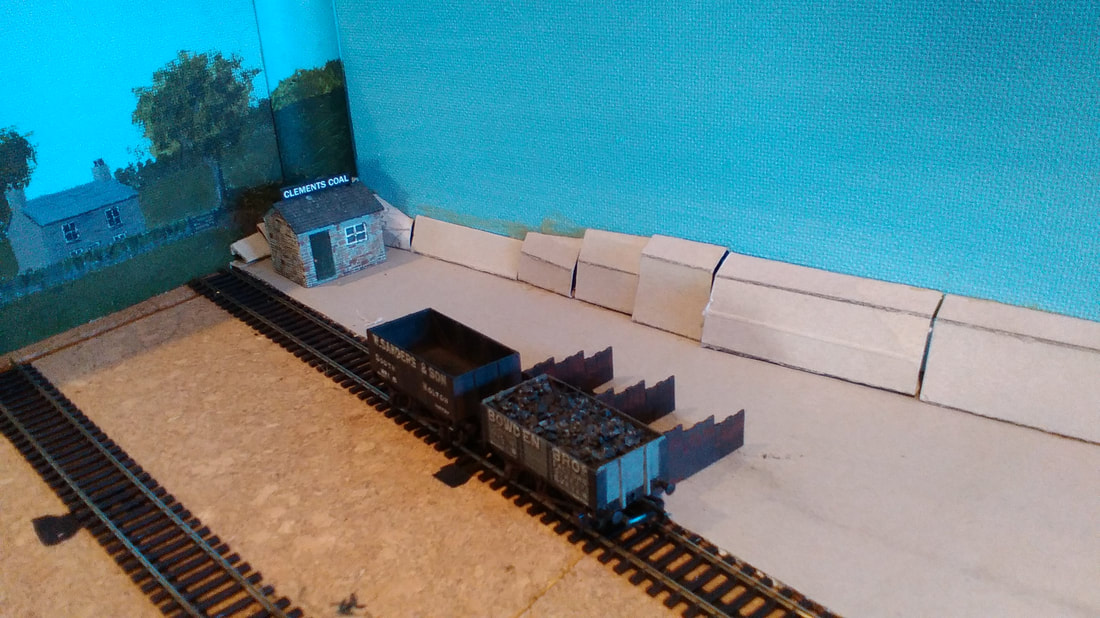 The first of two views showing how we envisage the coal yard. 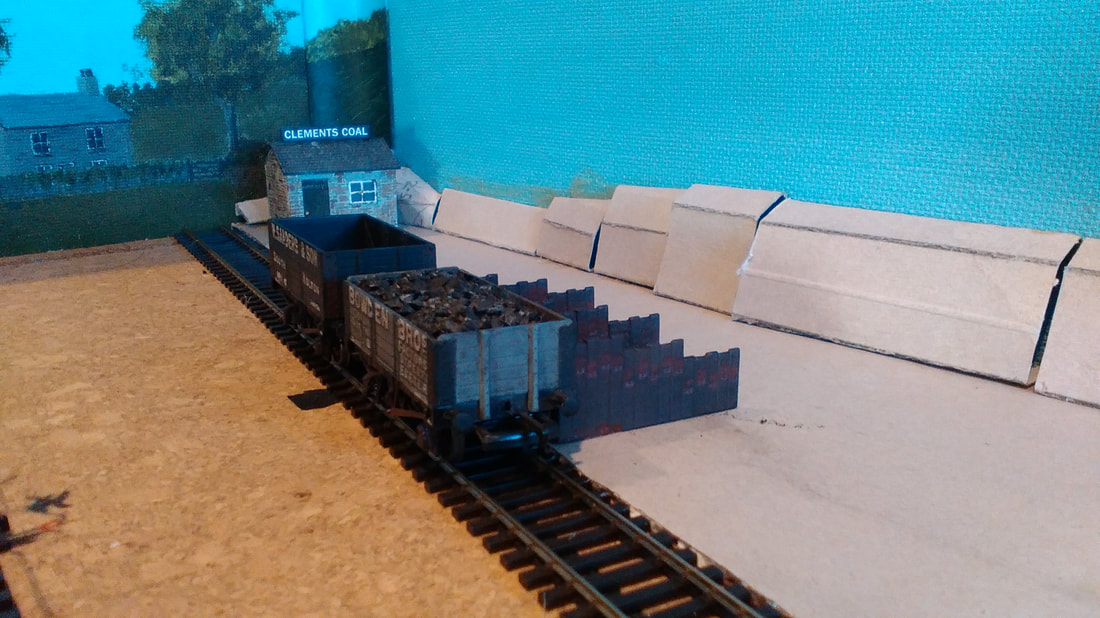 A close up of the staithes with a couple of coal wagons present.