﻿﻿﻿Smithick Vale is a 20" by 10" 00 gauge round and round layout that is designed to not depict any era or location, this means that almost anything can run and not look out of place.﻿﻿﻿﻿ 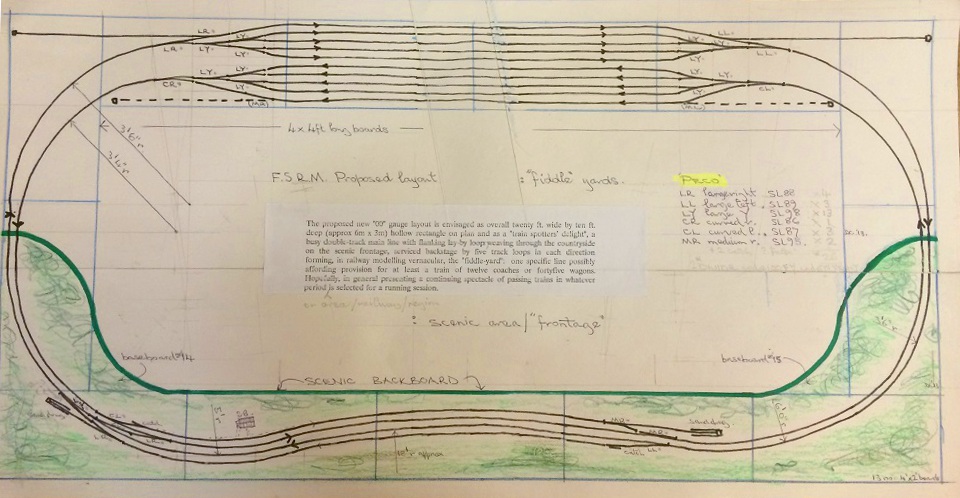 The main plan for Smithick Vale 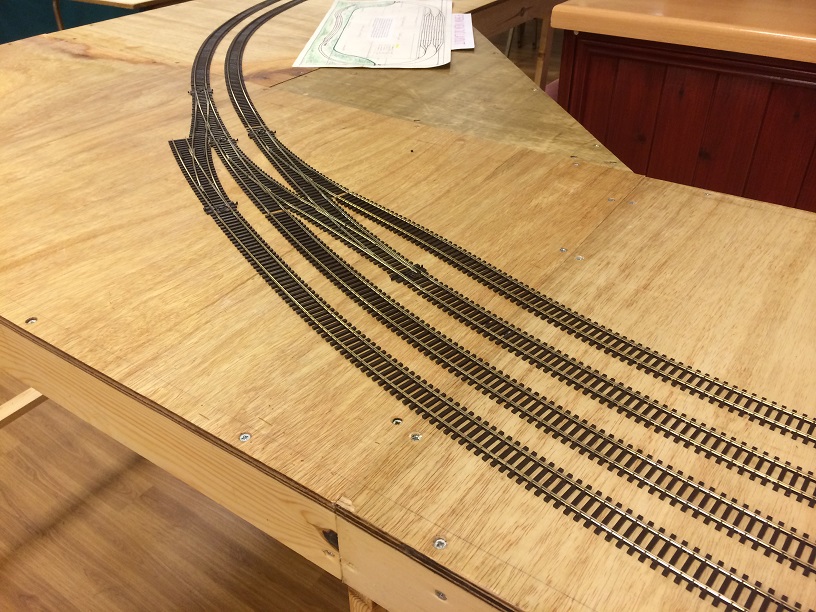 The shape of the entrance to the loops. This has been altered slightly to move the crossover to the other side of the loops, this will give more operational flexibility. 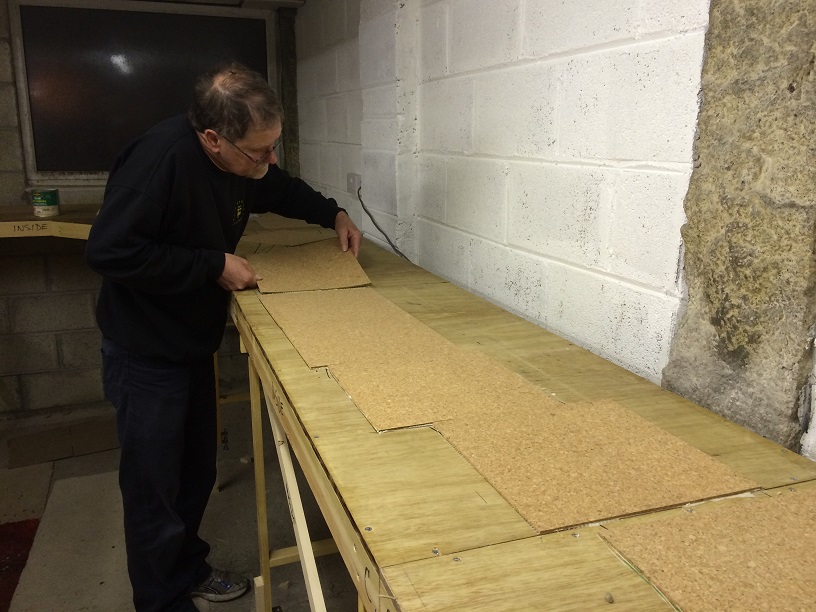 Cork being laid in line with the planned course of the track. 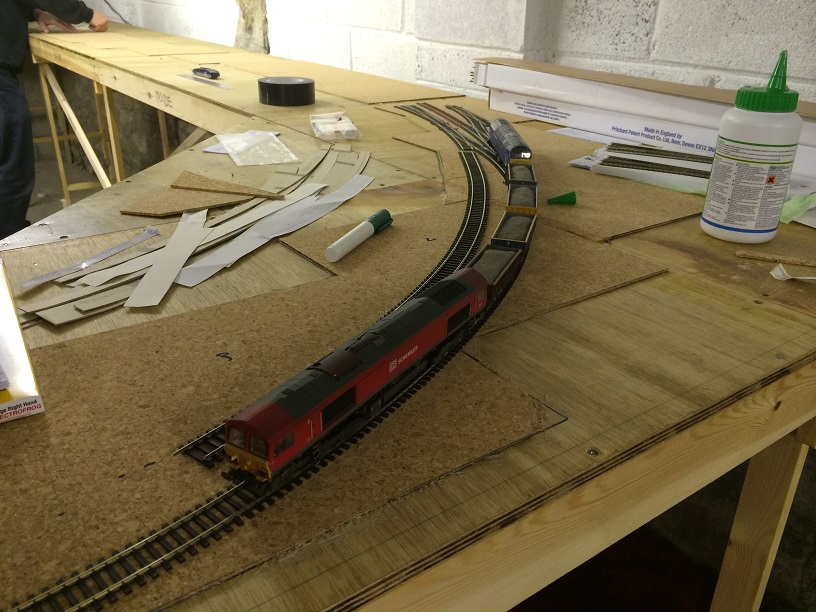 How things will look. DB Schenker 66101 with an engineers train.
Work on Smithick Vale has pro﻿gressed and track laying has taken place. We have even had a few trains running already. 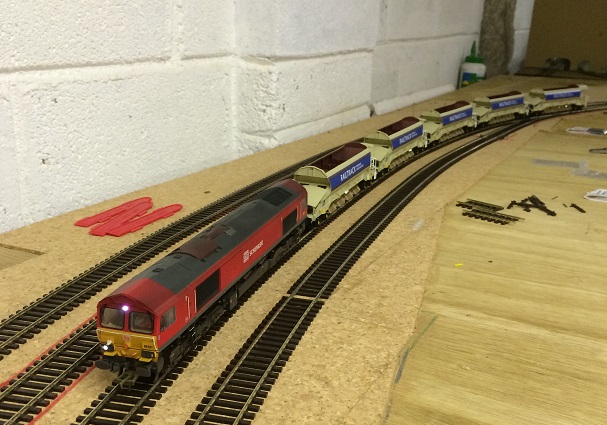 First train to run on Smithick Vale DBS livery 66101 takes a set of auto-ballasters along the main line. 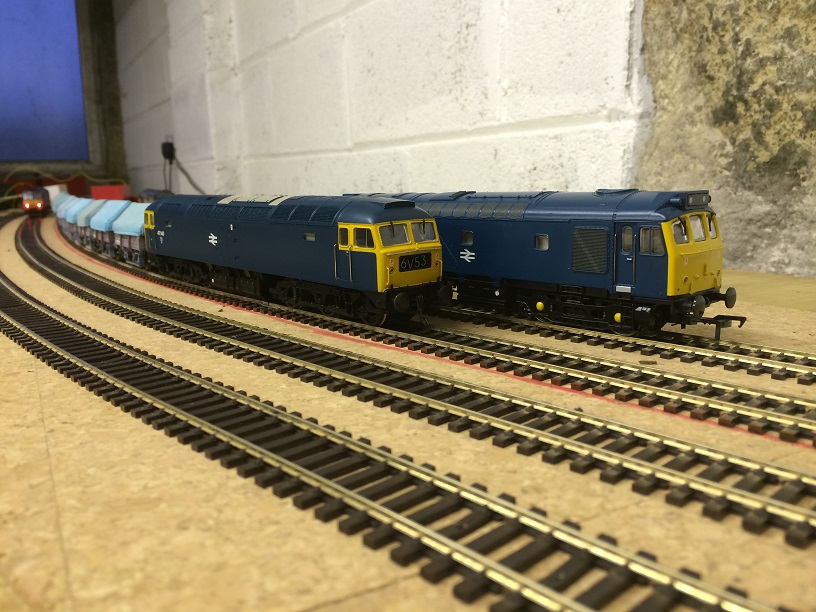 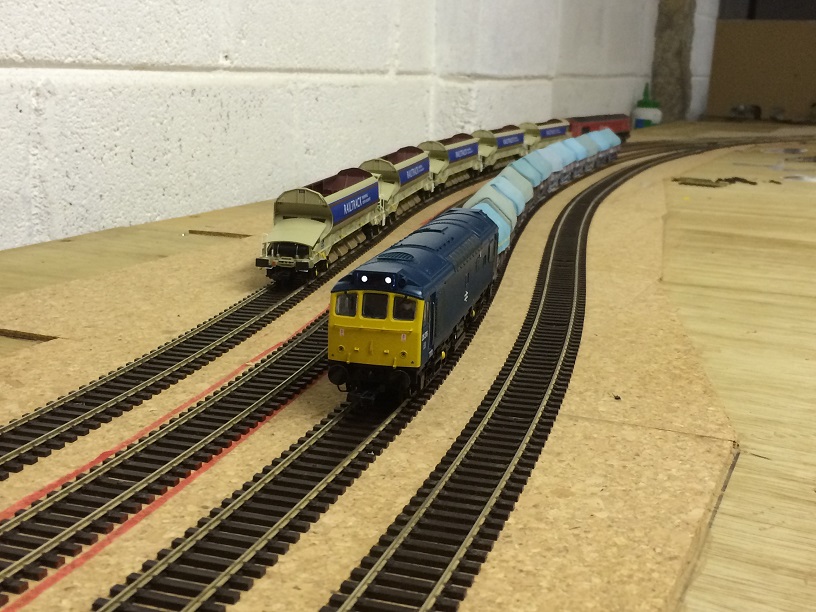 25276 takes a rake of clay hoods passed the loops. 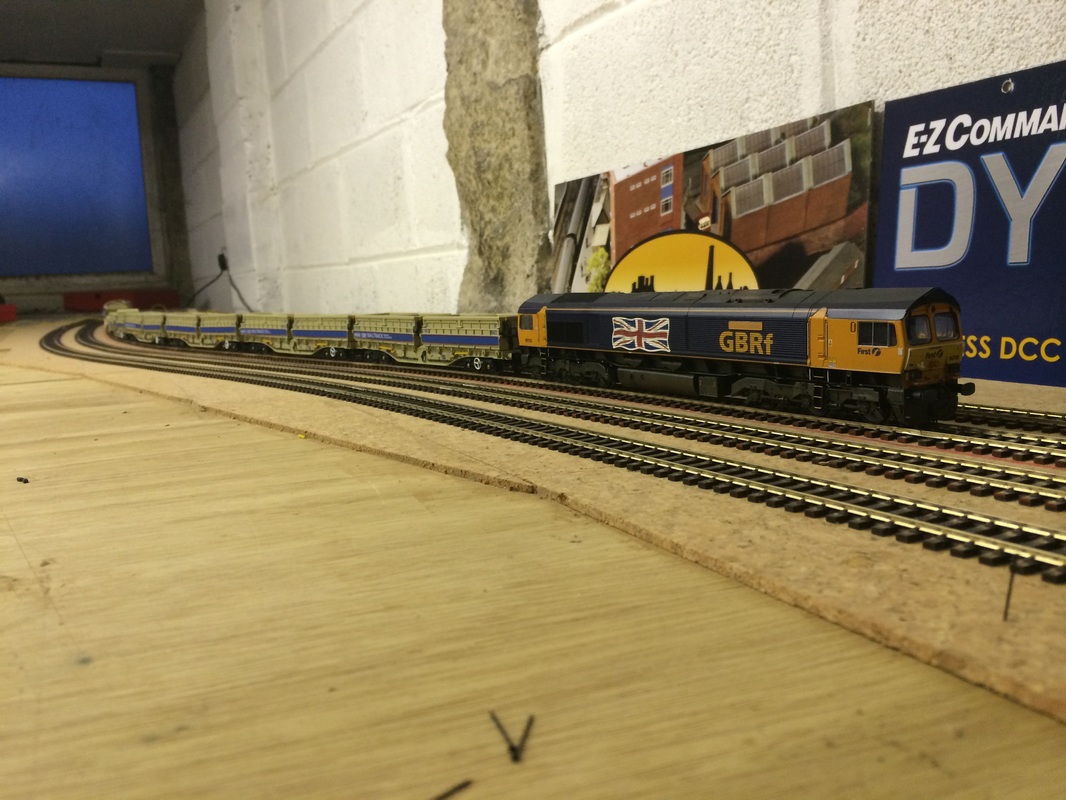 With most of the track laid, Union Jack liveried 66705 "Golden Jubliee" rumbles past Smithick Vale with a ballast train. 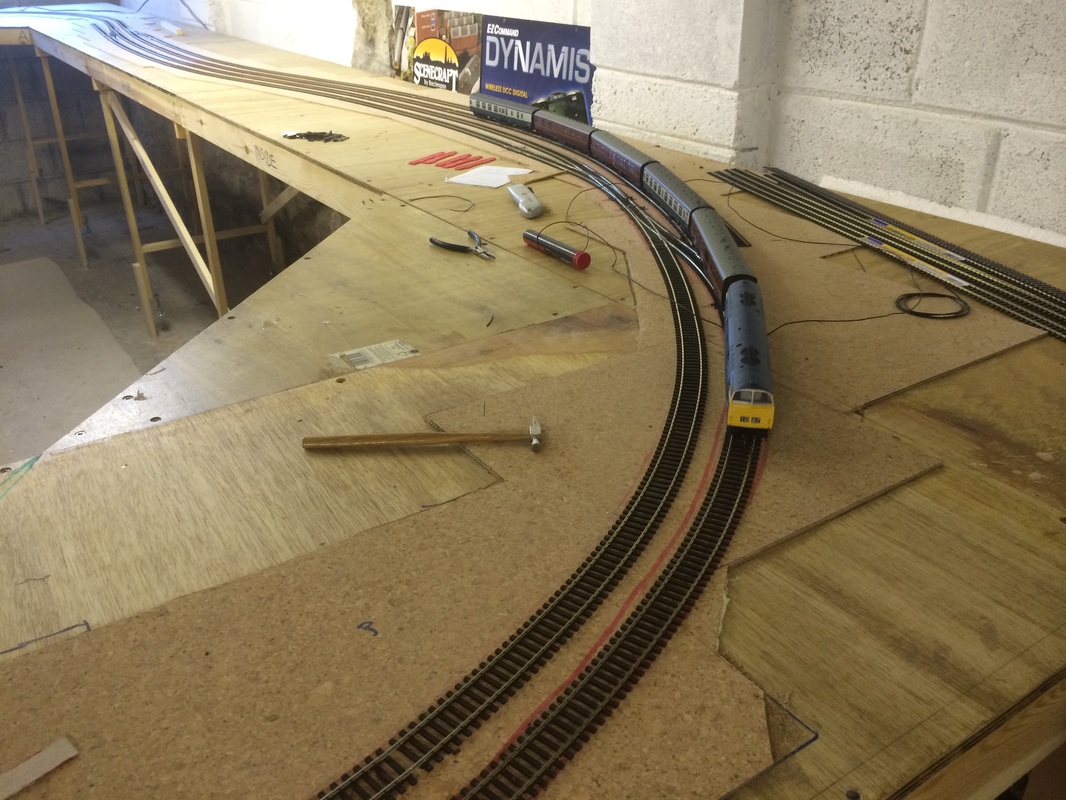 The First Train to make a complete circuit on the layout hauled by a Class 52, D1067 Western Druid. 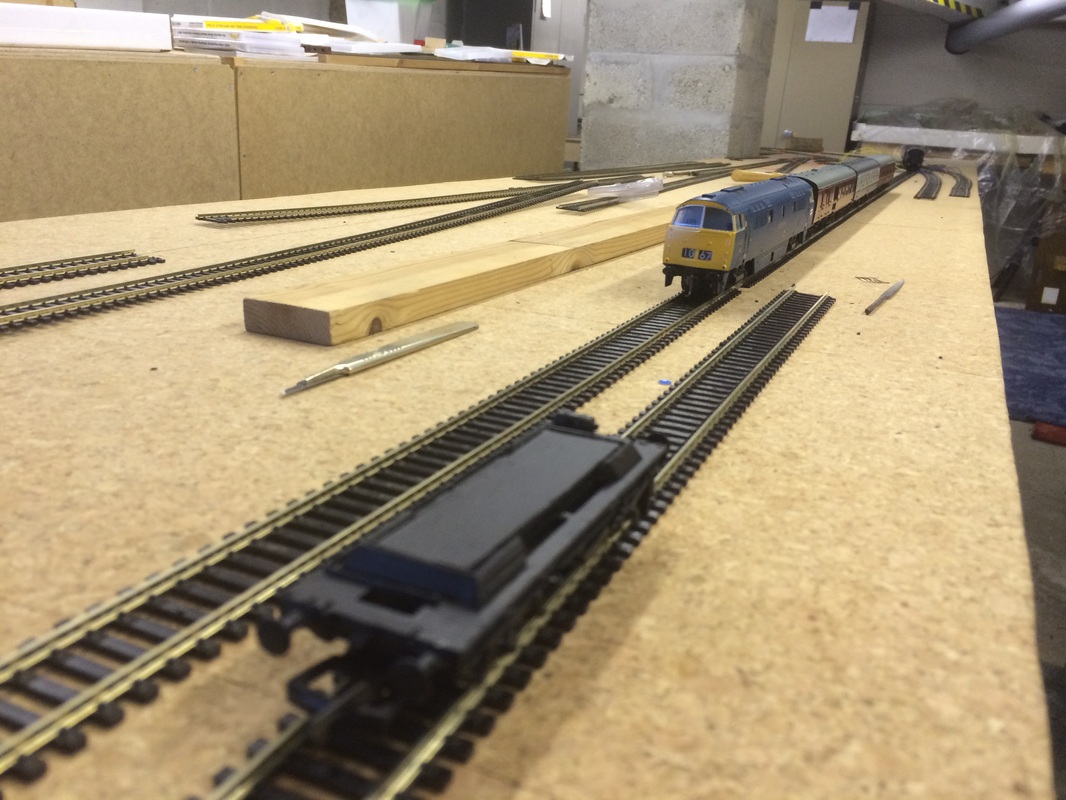 D1067 Western Druid Makes its way along the fiddle yard section, some of its coaches kept becoming uncoupled when entering the section, so some adjustments are being made to solve this. In the foreground is a RNA barrier wagon converted from a HEA, this will appear in the specialist modelling pages soon. 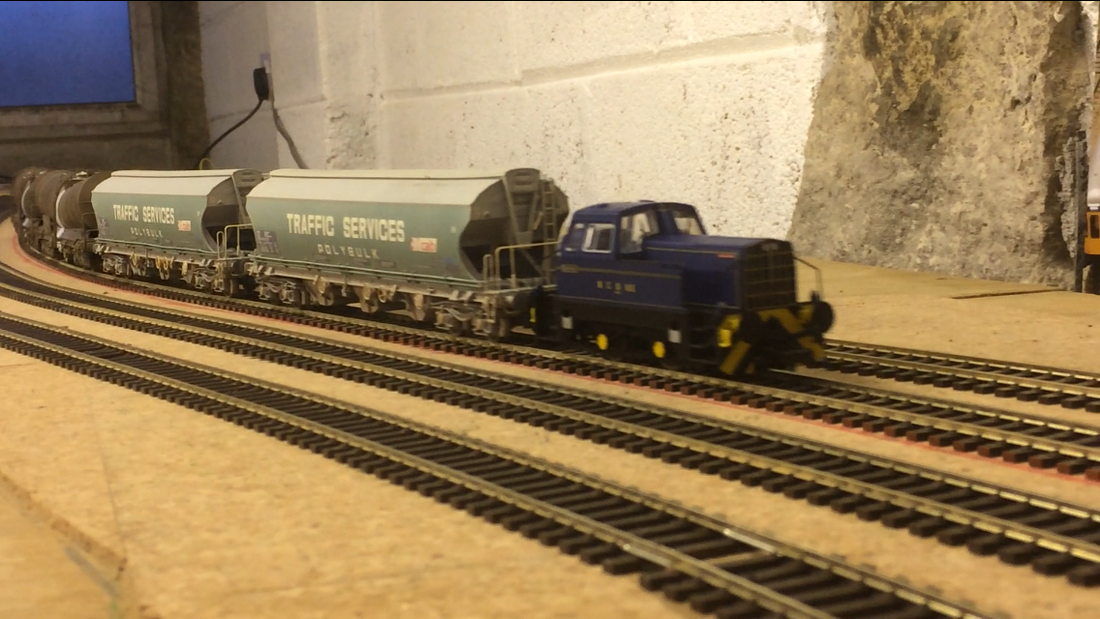 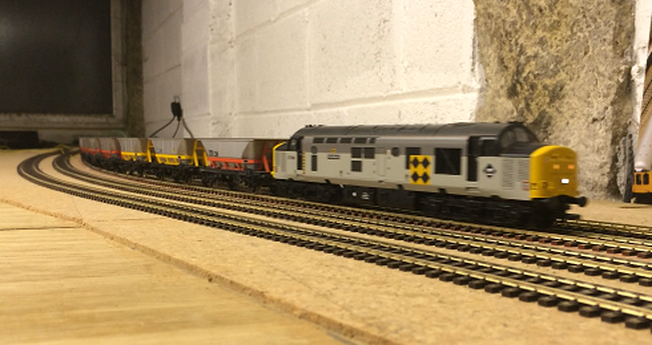 37698 thrashes through Smithick Vale with a coal train. 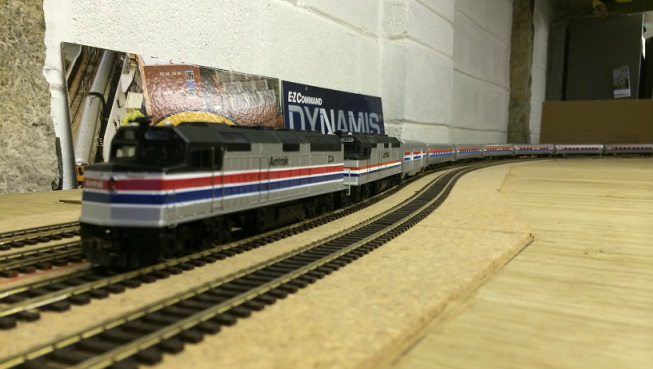 Giving Smithick Vale a US theme, a pair of Amtrack F40PH locos take a set of Amfleet coaches plus a baggage car passed Smithick Vale. 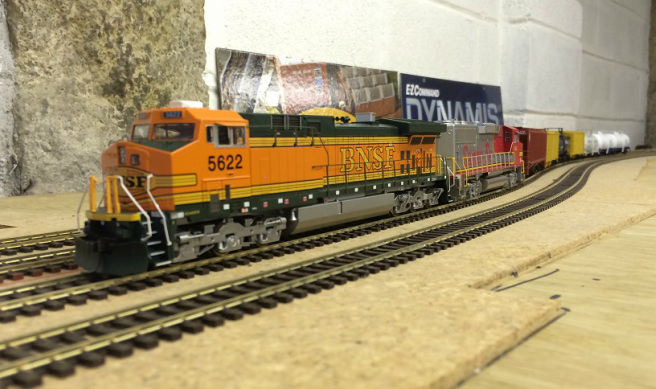 A BNSF ES44DC and a Santa Fe GP60 take a small freight train of box cars and tanks along Smithick Vale.
With the track laying now complete, we are now planning the layout wiring.  The intention is enable both the use of conventional analogue control as well as DCC.  Points will be electrically controlled and a number of track sections will be installed to allow some interesting working.  The ten road fiddle yard will allow a large variety of trains to be run on Smithick Vale.
A couple of members feel that by coincidence Smithick Vale closely resembles the loops at Lostwithiel, so to demonstrate this, during a running session one evening, a Class 66 with an almost prototypical length train of 36 CDA china clay wagons was running around on the layout.  However, due to the size of Smithick Vale however, the loops are only able to accommodate 17 CDA wagons plus a loco. 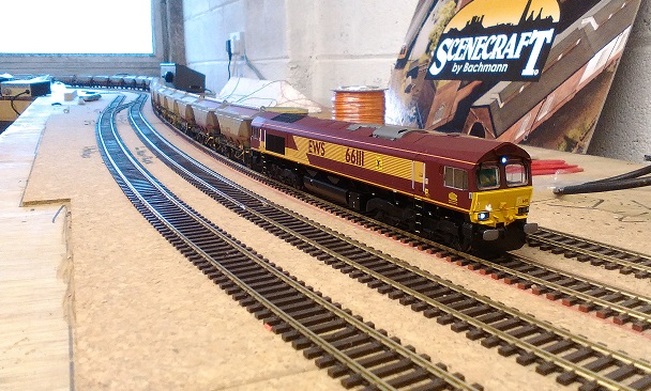 EWS (DB) Class 66111 hauls 36 CDA wagons past Smithick Vale. This type of train would be coming down from the now closed Marsh Mills clay dries via Tavistock Junction.
Now the track wiring is largely complete, we are turning our attention to the ballasting.  We have started by spraying the track with a brown track colour, this hides the plastic appearance of the sleepers and the bright rail sides.  The rails will need a coat of suitable rust coloured paint as well. 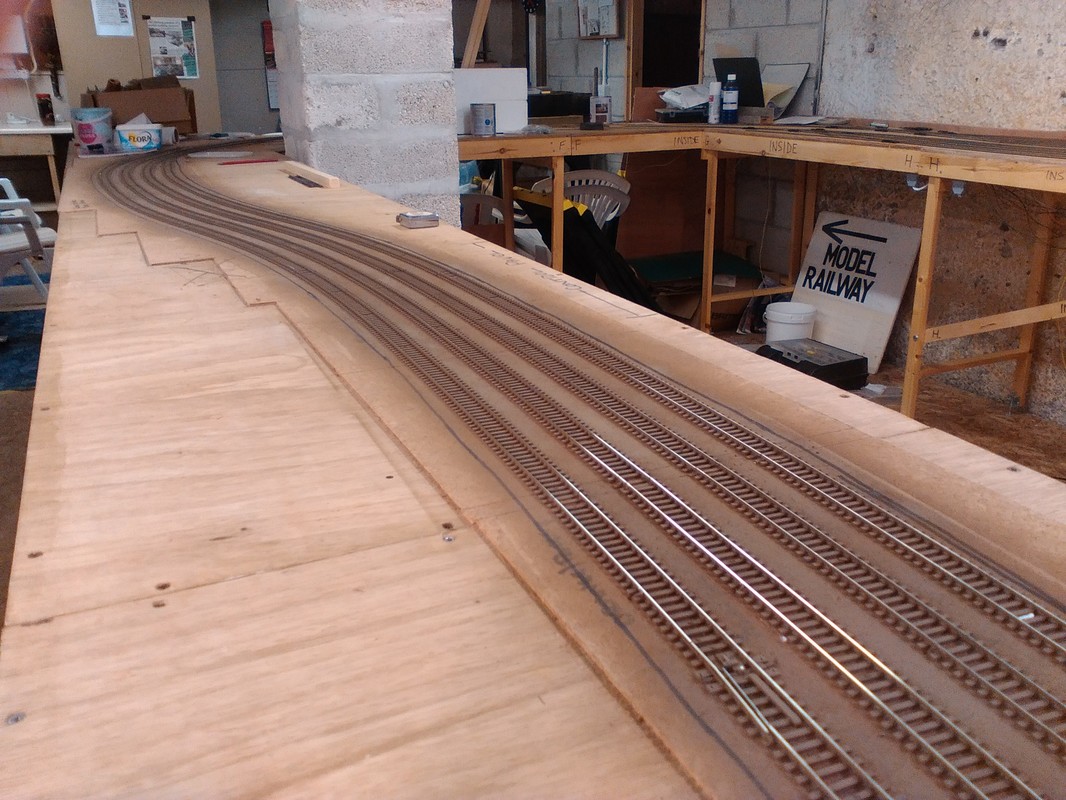 The track has been paited brown, now the tops of the rails are cleaned and tested. 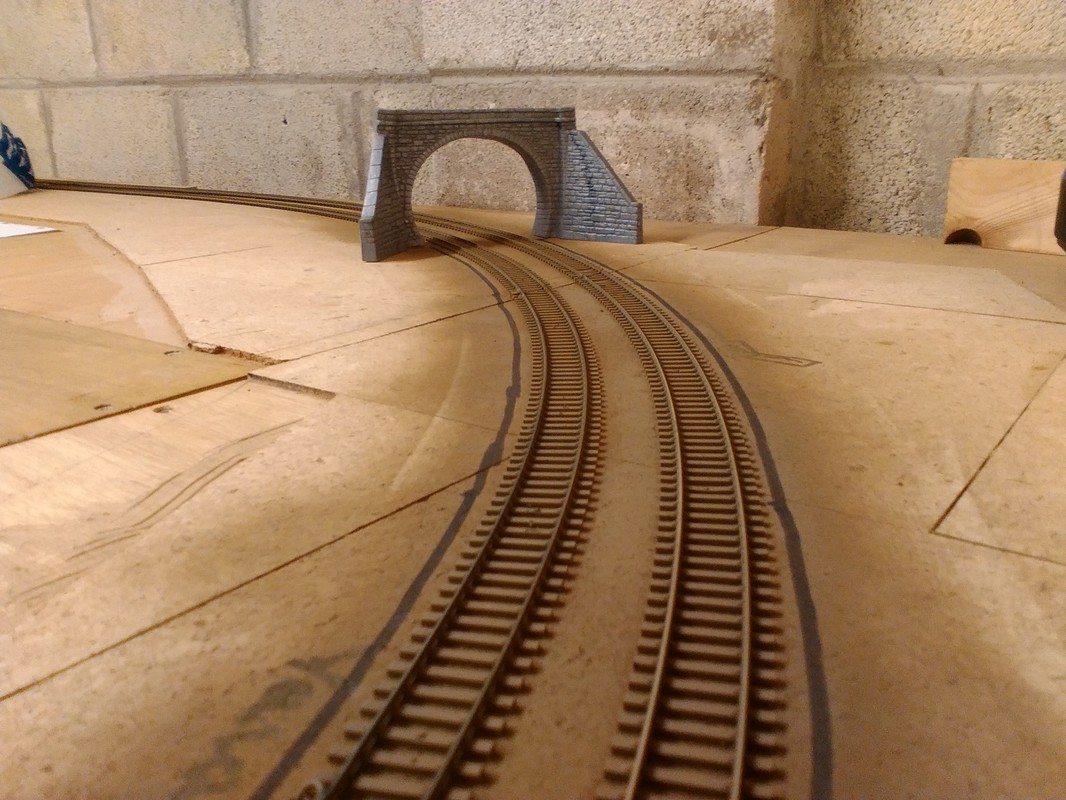 The double track mainline showing the approximate position of the tunnel mouth. This section will be a cutting with an accommoodation bridge before the tunnel. 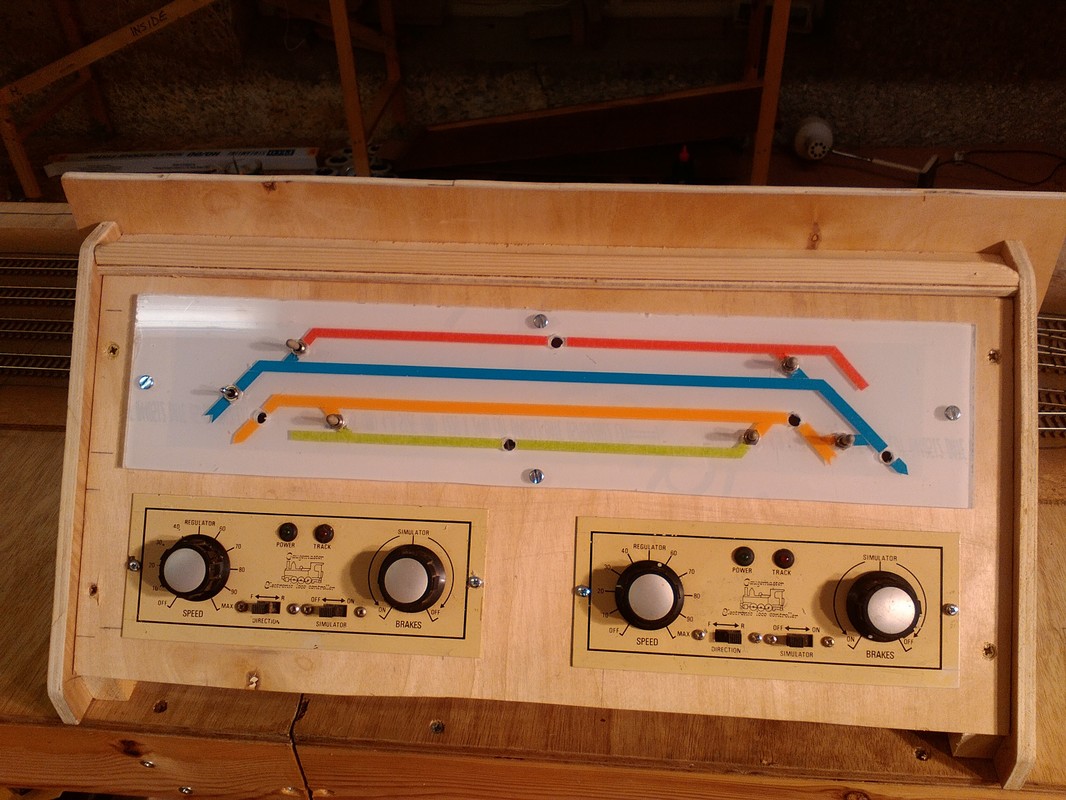 The control panel is taking shape nicely.
Work has been commencing well on Smithick Vale.  With the track laying and section wiring complete, it was time to start ballasting.  We decided to use a grey ballast, mixed with a grey blend, both available from Woodland Scenics. 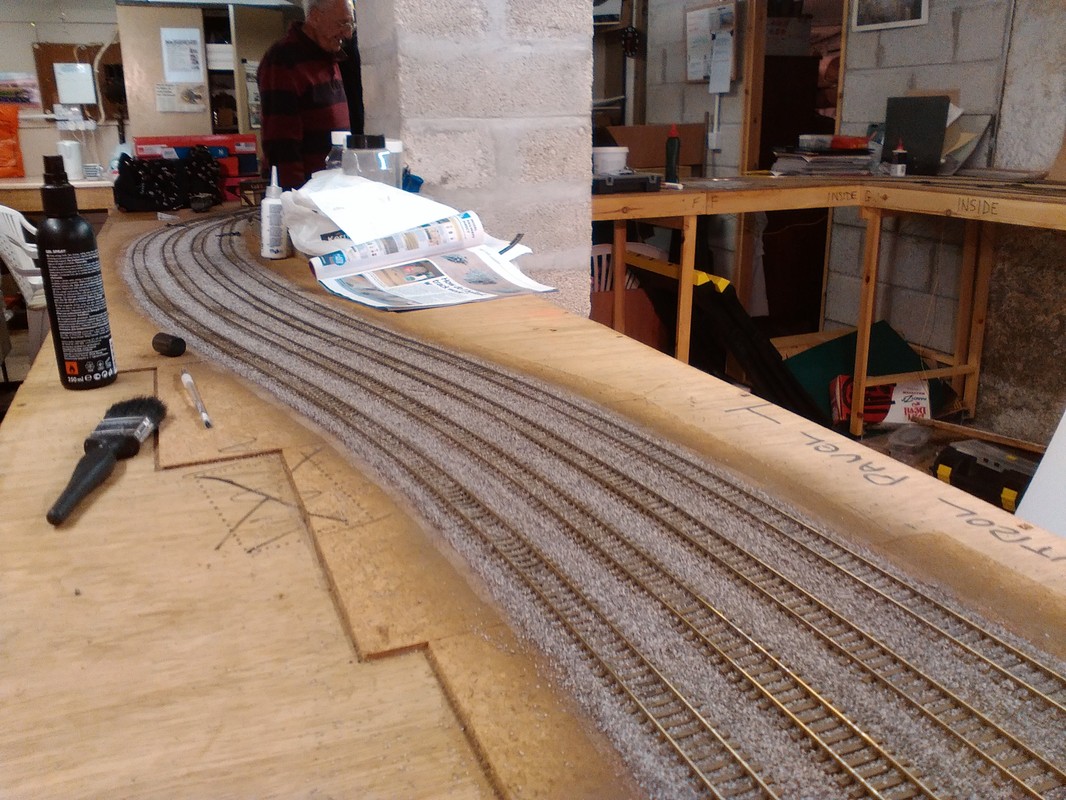 The ballasted track on the scenic section of Smithick Vale.

With ballasting completed for the weekend, there was a photo opportunty to get class 33 hauled P.W. train returning to Westbury.
The next step is to clean up the track and have a running session (for testing purposes) before commencing any further scenic work. 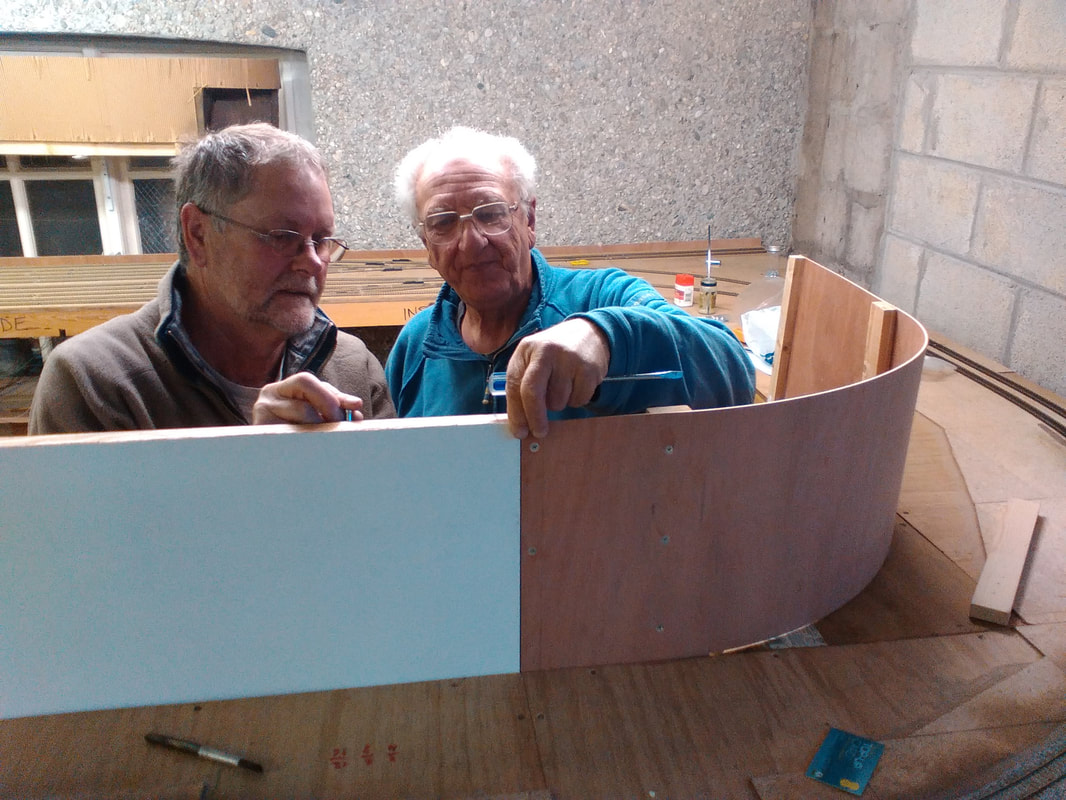 Members installing the back boards on Smithick Vale. 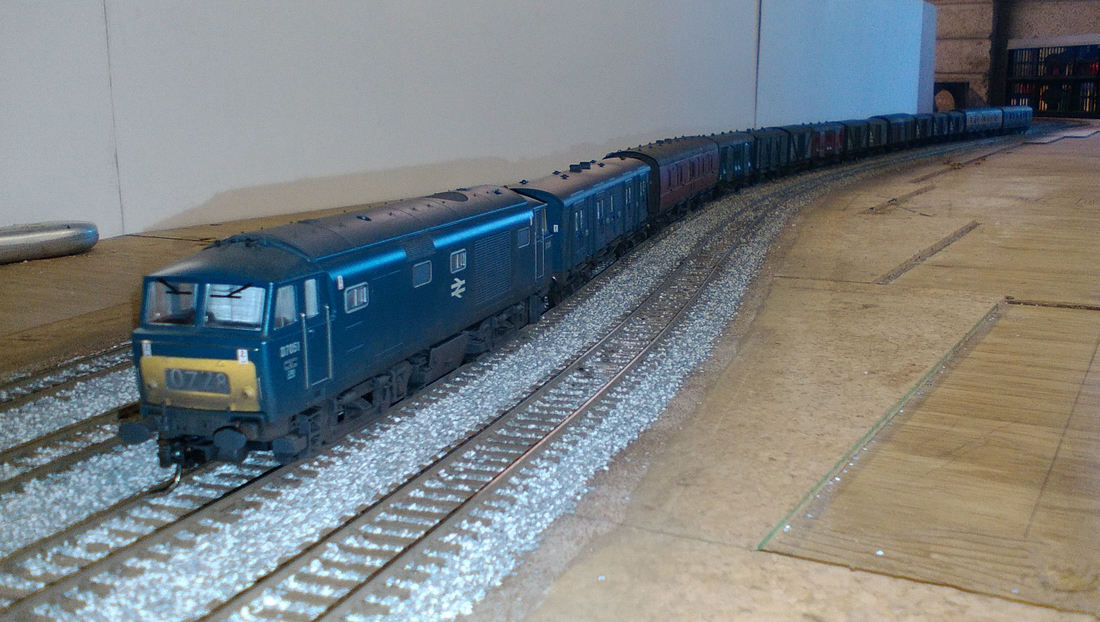 A chance to have a bit of a running session, D7051 is seen on a parcels train, the weathering techniques will appear in our modelling pages. 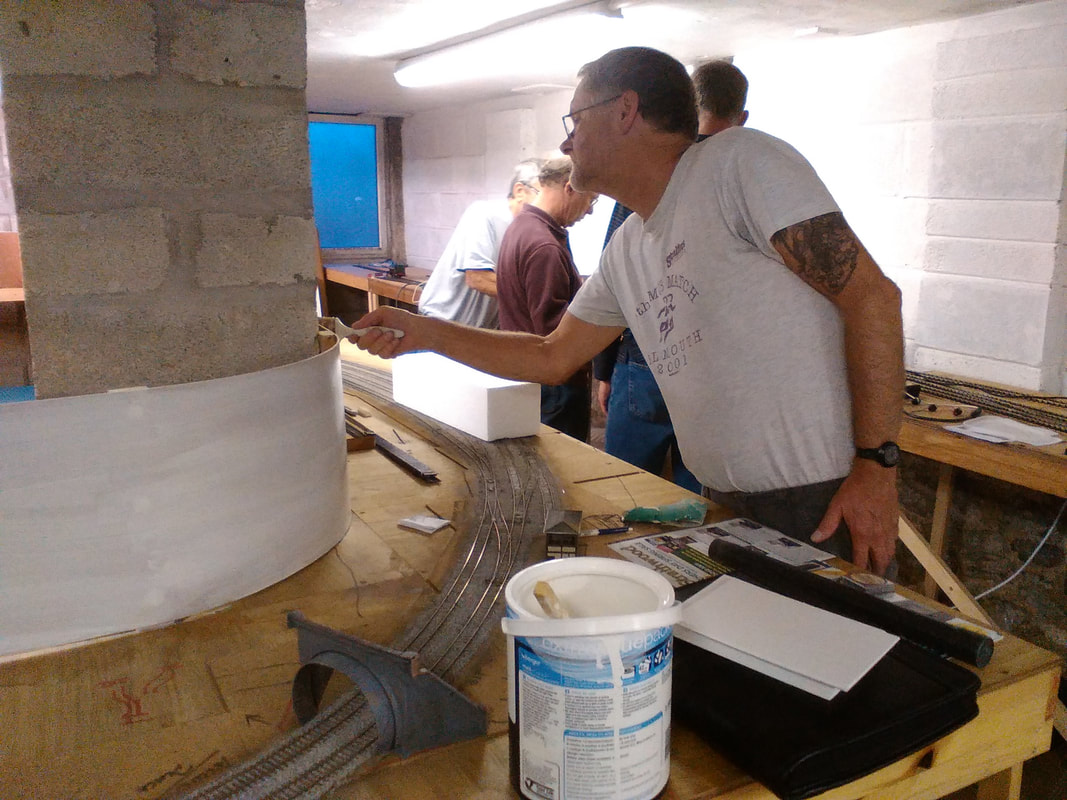 With most of the backscene boards installed, we took the opportunity to give them a coat of paint.
Wiring of the layout and control panel is well underway and attention has now turned to the scenery.  Initially we have been building up the land around the two tunnels which form the scenic breaks. 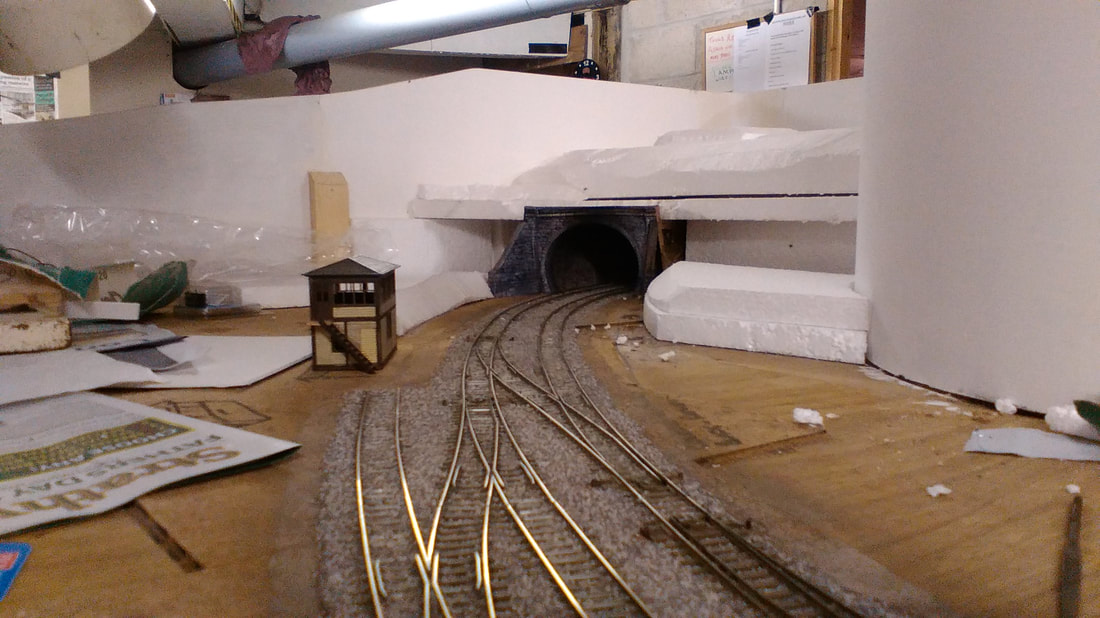 The southern tunnel together with the crossover and signal box. This view is looking in the down direction. 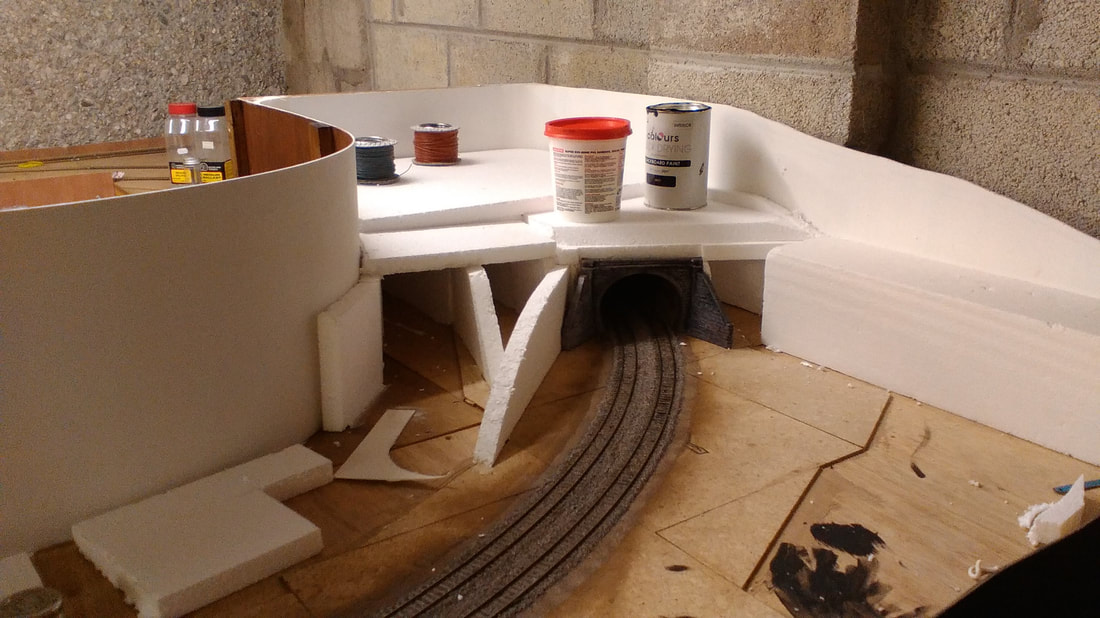 The northern tunnel will be approached in a cutting with a road overbridge before the tunnel itself. 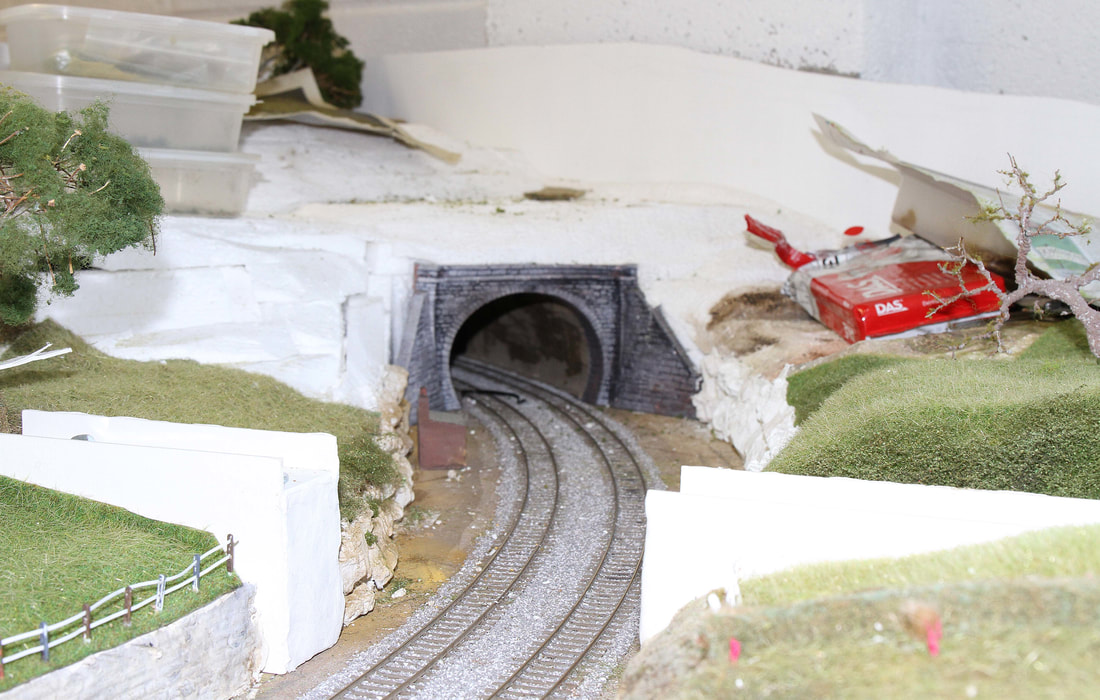 Scenic development in progress at the northern end of the layout. 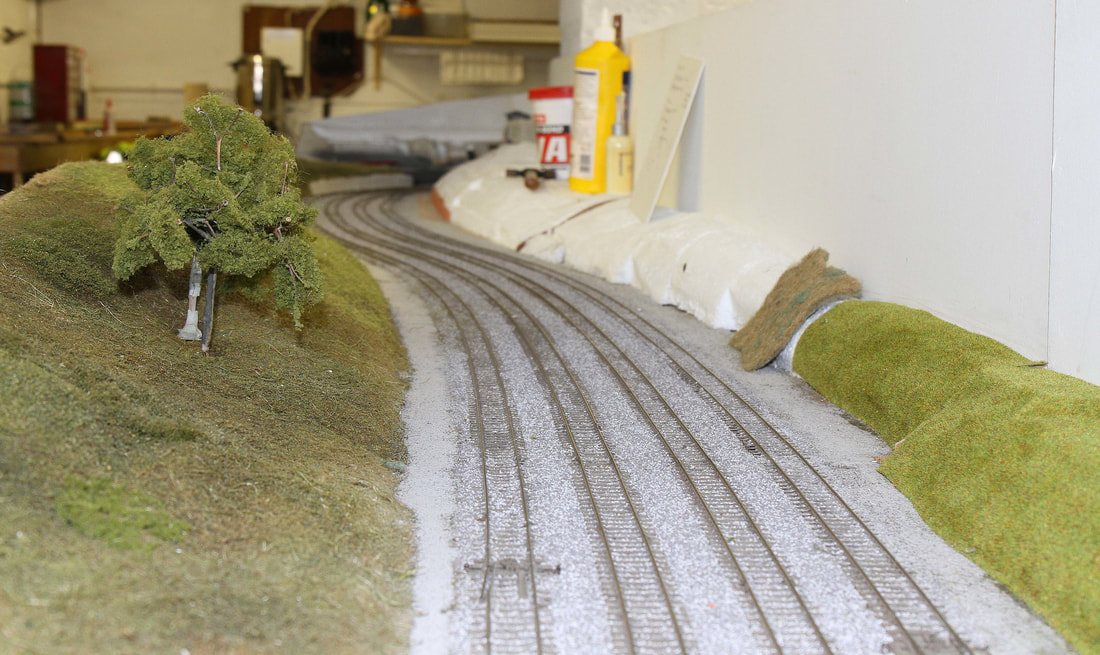 Looking south through the loops. 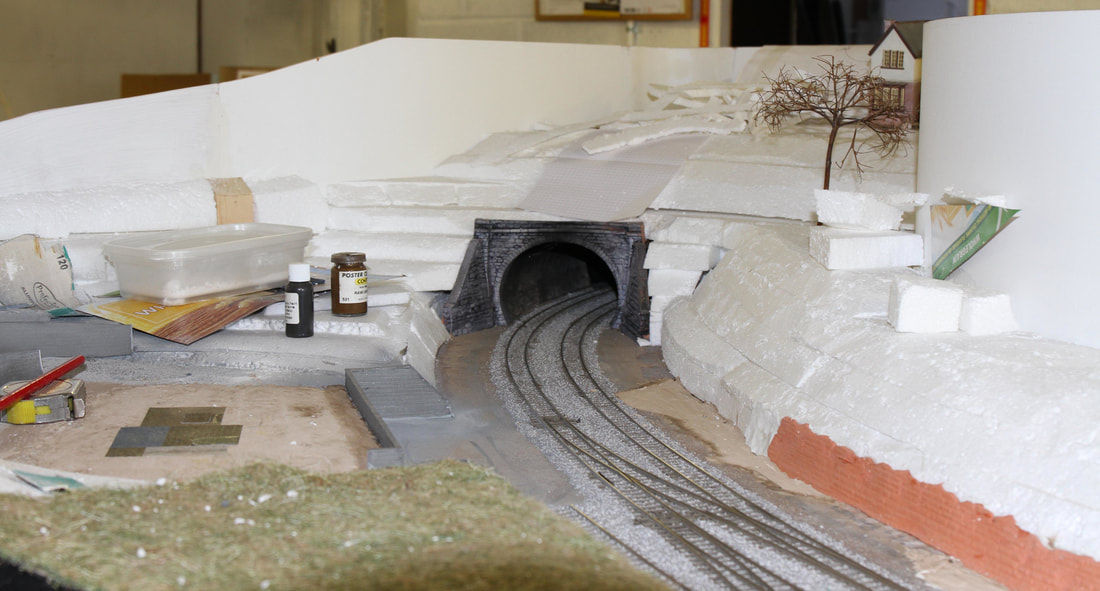 The scene at the southern tunnel, Ivan's cottage will go in the flat area to the left of the picture.
Progress on the scenic section has been ongoing and the rural scene is taking shape.  After detecting a few running problems in the fiddle yard, we decided to renew some of the track, this has improved things significantly.  Other work has also taken place on the signal box which is now nearing completion.  Originally a Hornby product, we were unhappy with the pitch of the roof, so we fitted a 3D printed one which has greatly improved the appearance. 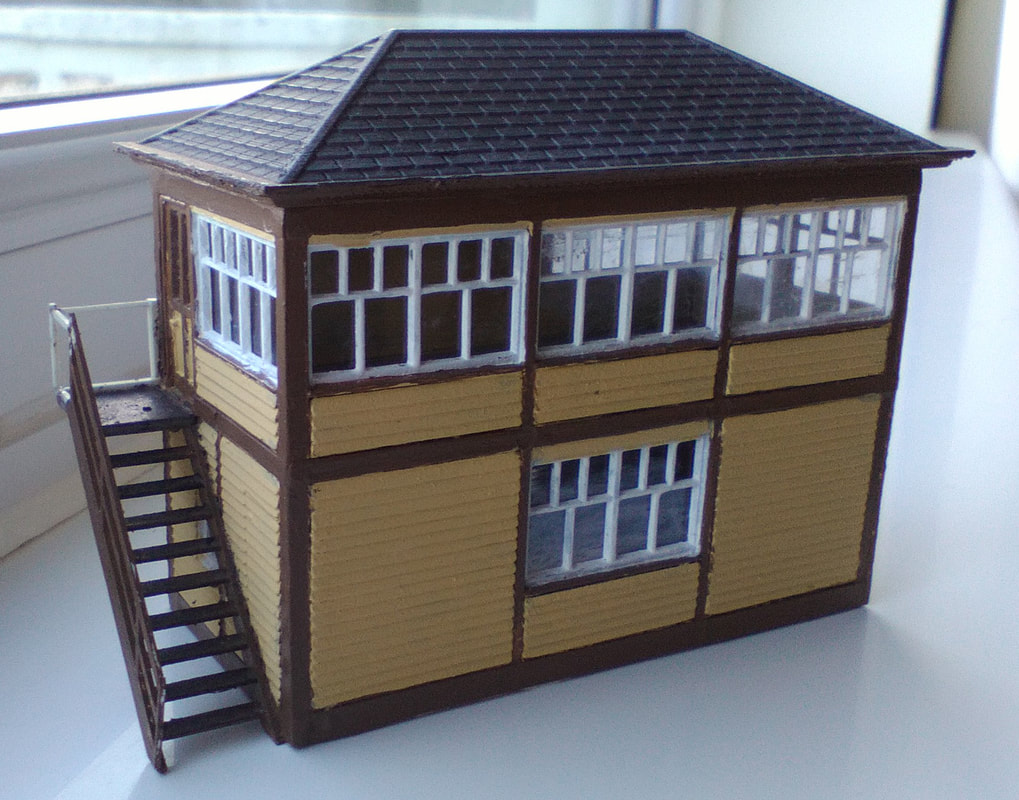 The signal box is taking shape, with a few minor bits of tidying up to do. Additional rails on the landing, a couple of roof vents, a stove pipe and a lever frame should do the trick. 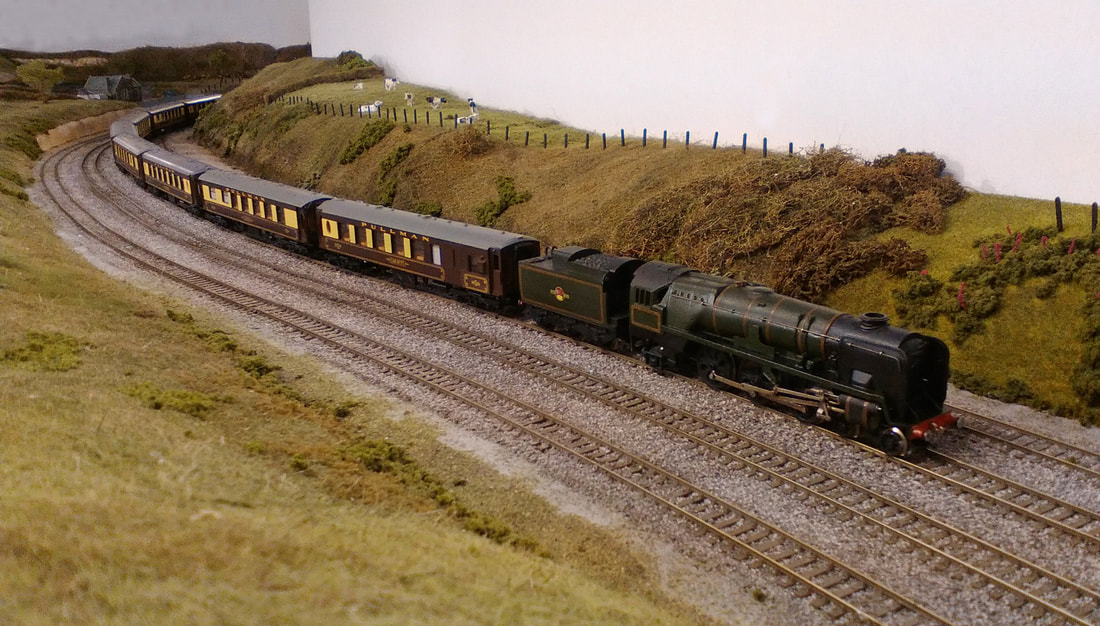 Following an afternoon adjusting a couple of rail joints in the senic section, we took the opportunity to run a "test train". The Wrenn West Country which will be 34005 'Barnstaple' (plates ordered from Modelmaster) and is seen running through the vale with a Pullman special. 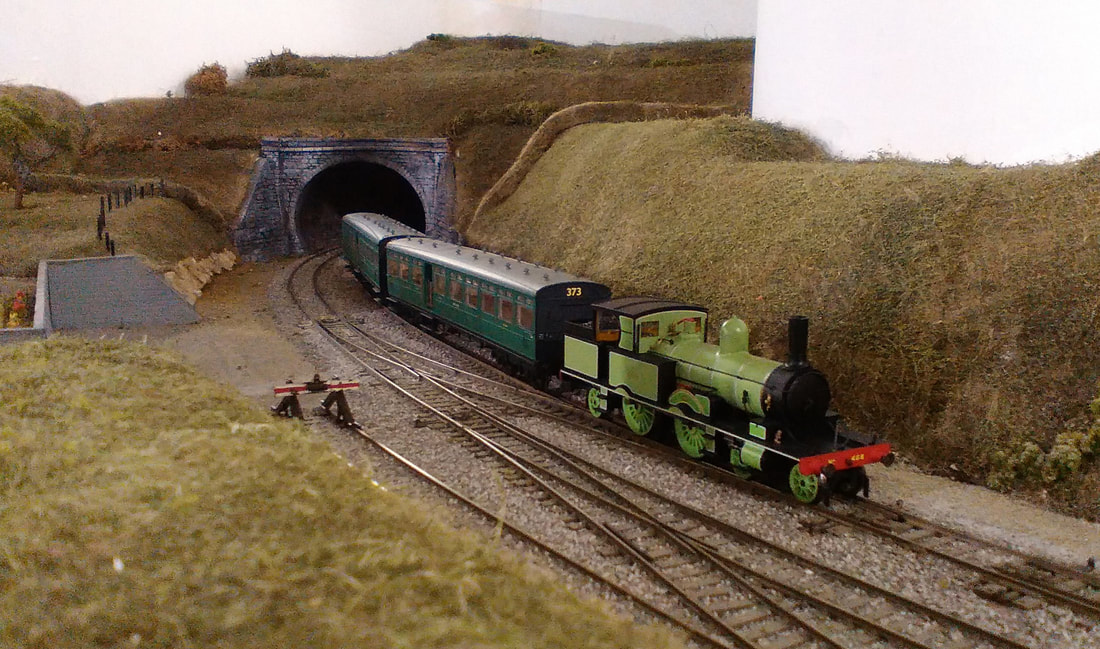